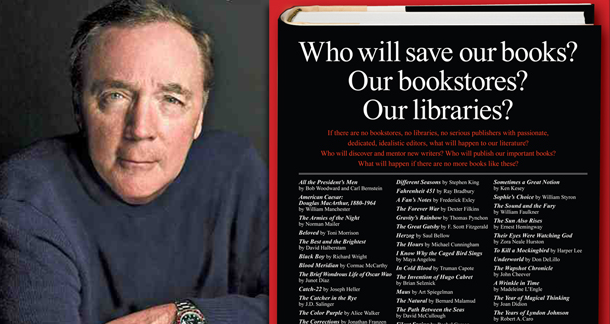 James Patterson feels very strongly about books, bookstores and the publishing industry. Perhaps it’s no surprise coming from the bestselling novelist behind the Alex Cross series, which started all the way back with Along Came a Spider (there are now 20). But the strength of his feelings became more obvious over the weekend when he placed an ad in the New York Times Book Review and one in Publishers Weekly advocating some kind of government intervention “in order to save an industry besieged by bookstore closings and consolidation of the few remaining major publishing houses”.

When asked if he was pushing for a Goldman Sachs-like bailout, he said:

I don’t think it’s a question of bailing out, necessarily. In Germany, Italy, and France, they protect bookstores and publishers. It is widely practiced in parts of Europe. I don’t think that’s outlandish. But people have mixed feelings about the government doing anything right now… There might be tax breaks, there might be limitations on the monopolies in the book business… I’m not sure what needs to happen, but right now, nothing’s happening.

It’s two days after World Book Night and he may be right that something does need to be done. The changes in the industry that are so fundamentally shocking to those of us in any way involved don’t really get a lot of column-inches out there in the real world.

The press doesn’t deal with the effects of eBooks as a story. Borders closing down is treated as a business story. Where we are in Westchester during the summer, you’d think that’d be a bookstore haven, and there’s nothing. And that’s not unusual. I don’t think we can be the country we’d like to be without literature.

I live in the UK where the recession has led to cuts in local council budgets to the point where a number of places are closing libraries to save money! The idea that we may be creating a future generation that doesn’t have ready access to books (of whatever format) is quite a frightening one, don’t you think?

No, no bailout. I see the changes in the publishing industry as a good thing (for starters, fewer traditional publishing houses would encourage writers to self-publish).

And, really, funding aside, how could government involvement in publishing be a good thing? At all?

There may not be bookstores in the traditional sense, but it's easy to access ebooks. Most classics are free on Kindle. Even without buying a Kindle, you can read them in your web browser. Does it suit everyone's preferencence? Certainly not. But future generations aren't being deprived of books. They're just getting the content in different ways.

The keynote address from Neil Gaiman was especially effective in discussing this. He gave the anecdote of a man who bought old calendars in bulk. When his wife yelled at him for it and told him what an idiot he was, he said, "You can believe that if you'd like, but if 1993 comes round again, I'll clean up." Gaiman noted that too many in the publishing industry "are waiting for 1993 to come round again" rather than adapting to new technologies and opportunities.

I would love to see increased funding to libraries. The practical monopoly of Amazon in the ebook industry may need to be addressed. There are places here that some attention or regulation may be required. But the book industry doesn't need to be "saved." Publishers must follow the code of evolution: Adapt or die.

Dwayne from Cincinnati, Ohio (suburbs) is reading books that rotate to often to keep this updated April 25, 2013 - 8:35am

So what is the plan, a permanent ongoing bail out of everything that doesn't do well? Bookstores aren't going to just take off again next week, this would have to be ongoing.

I am in favor of saving our libraries. I don't believe reading should be a hobby reserved for those who can afford to buy a new book every time they want to read. I am NOT in favor of corporate welfare. If the publishing houses cannot grow and change with the world around them, that is their problem, not the taxpayer's. And it's not a problem for readers, either. I have a huge TBR "pile" full of paperbooks and ebooks, they're all from small presses. I don't have a problem with that.

Without bailouts, where will we go for some good, old-fashioned inertia?

Without monopolies, where will we go for some good, old-fashioned inertia?

Without unsolvable paradoxes, where will we go for some good, old-fashioned inertia?

Interesting take. I live in L.A., and there are still quite a few great independent bookstores (one, ironically, entitled "The Last Bookstore" ((which I had the pleasure of sleeping down the block from two Saturday nights ago, on the sidewalk at the corner of 5th and Broadway, but that's another story)). As far as bookstores go, well the industry's changing. EVERY industry's changing. Heck, pro wrestling has become "sports entertainment." Movies are being "remade" rampantly and it seems like every other one is now in 3-D. And as far as James Patterson goes, Bless him for his opinions, but does he even write anything anymore? Every time I go to the Santa Monica Public Library (a GREAT library, by the way), and see one of his new books, it's always listed as being written by him "with" someone else. It seems like he all he probably does is look at the first ten pages and changes "thee" to "thou." Nice work if you can get it. But again, Bless him for being passionate enough about the written word to suggest protecting libraries. That I definitely agree with. And I do enjoy his earlier work. OK. Enough rambling. Time to go have a cocktail.

Bailouts undermine the market forces that make capitalism work.  This sounds more like an effort at publicity than it does a cry to rescue the publishing industry.  An industry which, based on what I've read, has come dangerously close to killing itself by ignoring the digital revolution, and then in trying to control it as opposed to leveraging it's strengths.