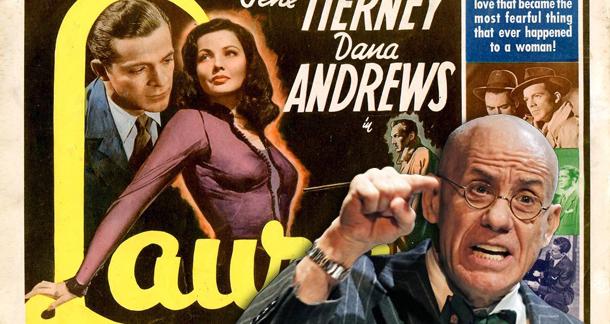 The Hollywood Reporter is... er, reporting that the one and only James Ellroy has signed on to pen the screenplay for Fox 2000's upcoming Laura remake.

The original 1944 film, directed by Otto Preminger, concerns a police detective (Dana Andrews) who falls in love with the titular victim (Gene Tierney) over the course of his investigation into her murder. It also features a fine performance by Vincent Price, and has been credited by David Lynch as a major influence on Twin Peaks. It is a Noir classic and one of Preminger's best.

Is Ellroy the right man for the job? He is balls deep in the genre, but despite his acclaim as an author, his adventures in the screen trade haven't been quite as successful. Street Kings, anyone?

Never saw Street Kings, but based on his prose, I feel like this movie needs Walken and Shatner.