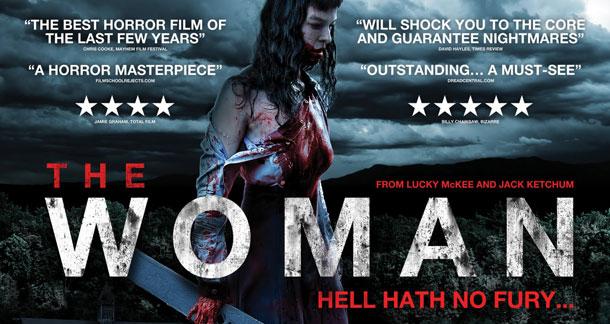 I sense you are wary, readers. Film in my literature news! Dreadful, the clutching of pearls! But listen: this is rad as hell, it involves free stuff, and it couldn't be easier. Words on paper are involved! Jack Ketchum, an institution in horror (The Girl Next Door, The Lost, Off Season, etc. Respect!) has a very simple proposal for you: go see his latest film adaptation, The Woman, and get a piece of the action, so to speak. Every person who sends a ticket stub from a screening of The Woman attended between 10/14-16th along with a S.A.S.E. (so very Pop! magazine) will find themselves hothanding a page from the rough draft of the script! Each page will be signed by both Ketchum and The Woman's script co-writer and director, Lucky McKee (May, The Woods, Sick Girl).

You may have recalled a buzz of controversy at the mention of The Woman; it's earned that recollection. At this year's Sundance Film Festival, some milchig brute had to be escorted from the screening when he stood up and began berating the film's intent with its scenes of (admittedly) degrading and violent acts toward the titular woman. This is not art, this is bullshit, burn it! and other shouts under-exercised, red-faced men shout as they are being shoved out of a film at a damn film festival. The kind of PR money won't work quietly for? Maybe. Or maybe he didn't keep his trap shut and let his brainpieces work until the end of the film as was intended by the medium. A mite unfair, non? Here's the synopsis:

The Woman is the last surviving member of a feral clan that has roamed the Northeast Coast for decades. When the last of her family is killed in a battle with the police, The Woman finds herself alone, severely wounded and vulnerable. Unfortunately, she is now a far too easy prey for local hunter, successful country lawyer and seriously disturbed family man Christopher Cleek. With his twisted set of ideals, Cleek decides to embark upon a deranged project - to capture her and "break" The Woman - a decision that will soon threaten the lives of Cleek, his family and The Woman.

The catch here is that The Woman is in very limited release; Bloody Disgusting has a complete list of every theatre screening the flick.

See the complete details--including where to mail your stub--on Jack Ketchum's site.

Fortunately one of the AMC theaters showing this is right by me. I'll be there!

we expect to see that page then, kirk. party! seriously though. I'm jealous.

I actually already read the book, and I'm a Ketchum fan, but my place is a little Podunk so I know it won't be here. :( Hoping after that site's maintenance is over I'll find that it's playing near one of my friends and they can just buy a ticket for me and I'll pay them for it.

Joshua Chaplinsky from New York is reading a lot more during the quarantine October 4, 2011 - 2:08pm

Can't wait for the carnage. This is one of the great things about living in New York. The Woman and Human Centipede 2, all in the same month!

lyndonriggall from Tasmania is reading Going Bovine by Libba Bray October 5, 2011 - 12:15am

Bugger, would be all over this but the movie is a little while away in Australia.