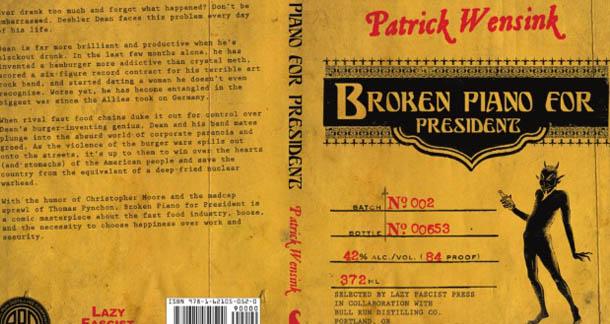 Patrick Wensink, who is now known to sites like Mashable as "Jack Daniel's Rejection Letter Guy", has gotten a snazzy new cover for his novel, Broken Piano For President.

As you no doubt remember, the original cover art for Wensink's novel emulated a Jack Daniel's bottle, and the whiskey-maker sent a very polite cease-and-desist letter asking him to change it. The letter shortly went viral, resulting in a PR and sales windfall for Wensink. He was even our site's September book club pick, the highest honor in all of literature.

The new cover is inspired by another booze bottle: Bull Run Distilling’s Temperance Trader bourbon. Wensink contacted the company and they're given credit on the cover.

What do you think of the new design? Is that bourbon good? Have you read the book yet?

Courtney from the Midwest is reading Monkey: A Journey to the West and a thousand college textbooks October 2, 2012 - 7:07pm

The book (and discussion) was fucking fantastic. Reading it made me feel drunk and it was a fun, fast read.

Joshua Chaplinsky from New York is reading a lot more during the quarantine October 3, 2012 - 5:26am

It's great that he found a company willing to let him use their label.