Jack Black to Star as R.L. Stine in the Upcoming Goosebumps Movie 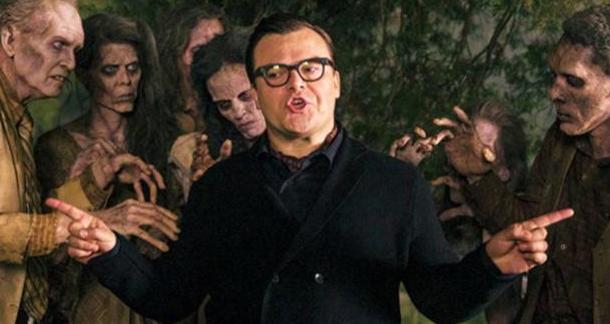 So, there's going to be a Goosebumps movie, but it's not based on any of the actual books. Instead, it's about a fictionalized version of series author R.L. Stine, played by Jack Black. Here's the official plot:

After moving into a small town, Zach Cooper (Dylan Minnette) meets Hannah (Odeya Rush), his neighbor. Hannah's father, R.L. Stine (Jack Black), who writes the Goosebumps stories, keeps all the monsters in the series locked up in his books. When Zach unintentionally releases the monsters from the books, Zach, Hannah, and Stine team up in order to put the monsters back where they came from.

Due out August 07, 2015, Goosebumps is bound to inflict some nostalgia for those who grew up devouring Stine's books. Or maybe it'll disappoint us all and we'll cry for a while. What do you think about this idea? Will it ruin the world as we know it?

What was your favorite Goosebumps book?

I think it's a good way to be as inclusive with the entire series as possible, but it's also going to be tricky to balance everything out.  I'm curious to see if they focus on certain subjects/monsters more than others (Slappy, for instance).

I was skeptical with casting Jack Black, but he really looks the part in the photo above.

Overall, the thing with Goosebumps is that they're not really going to ruin anything with the movie, even if it's bad.  Since this is only sorta based on the books themselves, I don't think think there's enough emotional attachment at risk.  It's actually a perfect audience dynamic for this approach, and I'm surprised Hollywood hasn't done something like this sooner.  My gut tells me it'll be fun and worth the nostalgia trip, so long as they don't go over the top with antics (another reason I was skeptical about Jack Black).  Maybe, like, Night at the Museum good, at best.

The Goosebumps books were never scary enough for me as a kid, though I did have some good creepy moments with his other series, The Nightmare Room.

And then I decided those weren't scary enough either and that's how I got into Stephen King.

Could be a cool movie. I didn't read a lot of the Goosebumps books. In fact, I'm pretty sure that I only read two of them (One Day at Horrorland and The Headless Ghost). More recently, I've wanted to dig some of them out of storage and read them for the fun of it. I was more into Scary Stories to Tell in the Dark. I requested the three volumes as often as the librarian would allow me to, then finally bought the collection.