It's a Three-peat! Naomi Ragen is Deemed A 'Plagiarist'. 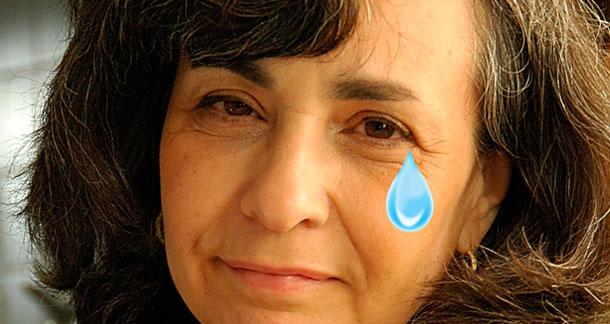 Boo you, plagiarists!  Seriously, do you know how much of a bummer it is for me to get up in the morning and write about you dorks?  Now I can't tackle the news on 50 Cent's book about diet and exercise.

Anyway, this has been a wonderful year for plagiarism, kids.

First, we had Q.R. Markham with his copy and paste job as seen in Assassin of Secrets.  Next, we had Lenore Hart with her various acts of literary theft.  These things tend to happen in threes though, so completing the trifecta is one Naomi Ragen, author of the book Sotah (St. Martin's Griffin).  Ragen was one of Israel’s best-selling novelists until the Jerusalem District Court ruled yesterday that she was guilty of stealing from Sarah Shapiro, author of Growing Up With My Children.

Unfortunately, we don't have specific examples or passages unlike the Markham and Hart articles, but according to the district court, they found "textual resemblance and identicalness in the characters and segments.  A significant part of the similarity is expressed in literal identicalness between the texts in both works."

Q.R. Markham played the 'addiction' card.  Hart is in denial.  Ragen, however, is going in a different direction with the 'it was a mistake' route and saying that some of Shapiro's text "got stuck in my head".

Shapiro's initial demand was NIS $100M (roughly $27M in USD), but the parties have a month to reach a suitable agreement regarding monetary compensation.  As for Ragen, she's been unavailable for comment--probably trying to keep a low profile.

1.) Don't steal because you will get caught.  There's always going to be someone out there looking for this kind of thing.

2.) I forgive you, James Frey.  All you did was fictionalize yourself, and compared to this rash of theft, it pales in comparison.

Moderator
Utah from Fort Worth, TX is reading Lonesome Dove by Larry McMurtry December 13, 2011 - 10:33am

Well, if you look at the differences in text length, Ragen at least came up with some of her own stuff.  It's hard to write all those words yourself.

This trend is really starting to bum me out. It was funny with Q.R., Lenore made me chuckle (mostly because of the absolute IDIOCY of her response to accusations) but now this, too?

James Frey is probably doing a dance of celebration right now. "Hooray! Thank you, dumbfucks, for taking the heat off me!"

Bizarre that in this challenged world of publishing and writing commerce (i.e., everyone wants free content online, emerging writers can't get a break from agents/publishers, and even vets are too often paid a pittance for their work), those out there who actually have publishing deals, have marketing and promotional platforms for their work, as well as the gift of bountiful audience attention, seem quite willing to squander it for literary laziness. Creative corruption. Followed by loads of idiotic excuses for their theft (someone else's work got "stuck in my head"????).

Given the valued opportunities they've been given, they are then either too arrogant to believe they'll be caught in their lie or they have a misguided sense of entitlement that allows them to believe the rules of ethics and integrity don't apply to them; the Anthony Weiners, Lindsay Lohans and John Edwards of the publishing world.

Beyond the audience who is being cheated, I think mostly of all the writers out there toiling away to find the true stamp of originality in their work, who write with vigilance each day to meet the supposedly high standards of the industry as mentioned endlessly and repetitively in every bloody rejection letter ("it's a challenging time in the publishing industry and a very subjective business, and we have to be very judicious about the choices we make....blah, blah, blah."). To read about these charlatans who have no respect for that demand of originality and excellence while they're waiting on tables, writing after midnight and being rejected on a daily basis is a true injustice.

I agree about James Frey. He got eviscerated for calling a fictionalized memoir a memoir, but it was a damn good book and at least he wrote the whole damn thing.

Joshua Chaplinsky from New York is reading a lot more during the quarantine December 13, 2011 - 11:07am

Thinking about the whole Frey thing, it's interesting that he got slammed for blurring the line between fact and fiction, while someone like Hunter S. Thompson is revered for it. Not that I'm comparing the two, talent-wise.

@Josh - I hadn't thought of that. But I think the difference lies in that Thompson was... forthcoming?... in his presentation of his work. Frey wasn't, and that pissed people off. Honestly, I think that if Oprah hadn't brought attention to it, no one would have cared one way or the other. It was a fairly good book, and like Lorraine mentioned, he wrote the whole thing. That is leaps and bounds ahead of the trifecta of stupid.

Joshua Chaplinsky from New York is reading a lot more during the quarantine December 13, 2011 - 11:40am

I mean, Thompson was forthcoming, eventually. I think at the time he caused a bit of a stir. That being said, I love a good literary hoax, but blatant plagiarism is unforgivable.

I think Thompson's unreliable narrator made the use of hyperbole and fictionalization palletable and easier to recognize in the works that were gonzo journalism.

Well they say that celebrities always die in 3s, so now we know the rule applies to plagarism charges too.