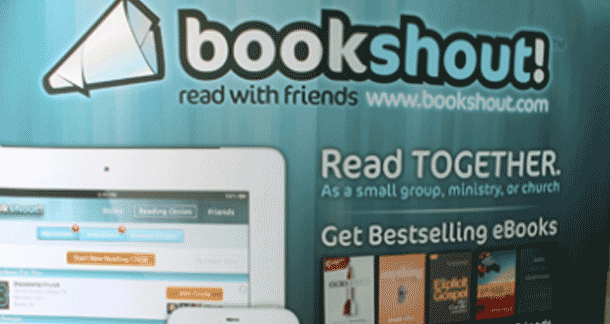 Okay, it’s not actually reading DRM’d files: users of the app log in to their Nook or Kindle accounts and BookShout verifies purchases made through Amazon or B&N is with one of the publishers they have an agreement with, and then lets the user access the publisher’s version of the file.

The eBook files, in other words, aren’t ripped from Amazon or Barnes & Noble servers but instead come legally via publishers, which control the licenses that govern eBook distribution. (BookShout also sells eBooks.) According to Paid Content, “the startup has already signed deals with Random House, HarperCollins, Macmillan and Wiley, and is ‘finalizing’ agreements with Simon & Schuster, Penguin and Hachette, along with other publishers.

So, it’s not going to let you read all your Kindle books on your iPad - it wouldn't even import existing books when I tried it earlier. The agreements aren’t extensive enough for all the books (and there’s been no talk at all about how it works with the indies), so you might be disappointed.

What it does do, though, is let a little light into the chasm between free and DRM controlled content. Would you be interested in an app to read all your eBooks, whatever platform? I know I would…

Can't you already do this? I have a kindle app on my iPhone and I read all my Kindle books there. I thought there was a Nook app, too.

Dwayne from Cincinnati, Ohio (suburbs) is reading books that rotate to often to keep this updated November 10, 2012 - 3:45pm

@Sparrow - I think the idea is to let you read Nook and Kindle in the same app.

Good logic, bad excution. Seems like they should have just waited till they had all/almost all before coming out and trying this. Who wants to check and see if there app will read a book before they buy it?

Yeah, I guess I don't see the appeal. As long as I can read my stuff on the same DEVICE it's fine. I don't read 4 pages of a Kindle book then rush over to a book I bought from B&N to read 3 pages, then flip back...

Dwayne from Cincinnati, Ohio (suburbs) is reading books that rotate to often to keep this updated November 10, 2012 - 11:10pm

Some folks hate the one interface or the other, but would still like the book there. Others like to have everything in one spot. Many have no idea what ebooks are all about and it is a good marketing ploy to be 'hey all the big stores in one awesome spot!' I think between those groups they are hoping to become a mini version of cable TV, with Amazon and B&N playing as HBO and Showtime.