Is James Franco About To Shoot 'Zeroville'? 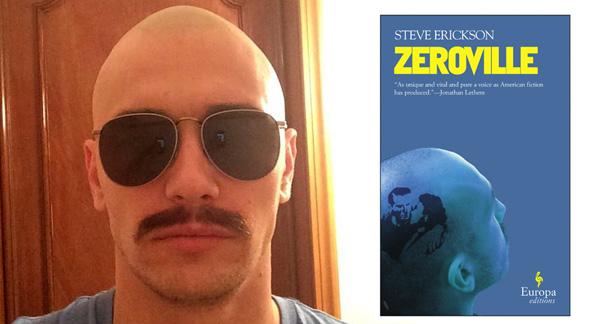 No, that's not a behind the scenes photo from Interior: Leather Bar 2 - Even Leatherier. It's James Franco as Vikar Jerome, the protagonist of Steve Erickson's fantastic novel, Zeroville.

Erickson is an author of whom I've sung considerable praise, and Zeroville is one of my favorites. From Europa Editions:

Zeroville begins in 1969 on Hollywood Boulevard, when a Greyhound bus drops off a film-obsessed ex-seminarian with images of Elizabeth Taylor and Montgomery Clift tattooed on his head. Vikar Jerome steps into the vortex of a cultural transformation: rock ’n’ roll, sex, drugs, and—far more important to him—the decline of the movie studios and the rise of the independent director. Jerome will become a film editor of astonishing vision. Then through encounters with former starlets, burglars, political guerillas, punk musicians, and veteran filmmakers, he discovers the astonishing secret that lies in every movie ever made.

Franco bought the rights back in 2011 and it looks like he's finally cleared time in his busy schedule to make it. He posted these before and afters to the social meeds last night, with the caption: "Get ready for Zeroville." 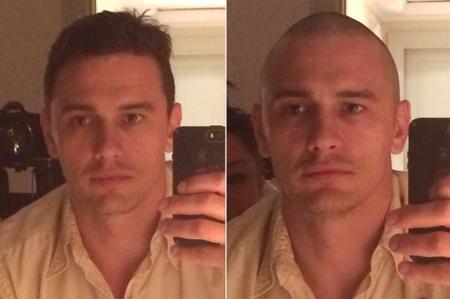 In a 2012 interview I did with Erickson, I expressed that I didn't think Franco was the right man for the job. This is what Erickson had to say:

Well, he’s the right man for the job in the sense that he likes the book a lot and wants to do it and has an enthusiasm for it that I haven’t heard from any of those other people...

Looking at these pictures, I'm still not so sure, but I can't help but get a little excited. What do you guys think?

Keith from Phoenix, AZ is reading Growing Up Dead in Texas by Stephen Graham Jones September 4, 2014 - 5:11am

I'm excited. Zeroville is my absolute favorite Erickson novel and it'll be interesting to see what Franco can do with it.

I hope Franco does make Zeroville. It will be interesting to see how he interprets Vikar. Best wishes on this project.

Joshua Chaplinsky from New York is reading a lot more during the quarantine September 4, 2014 - 6:13am

He certainly looks the part. Let's see that head tat!

I thought his Child of God adaptation was really good.

Joshua Chaplinsky from New York is reading a lot more during the quarantine September 4, 2014 - 6:49am

Robert.B from Northern Ireland is reading The Last of the Savages By Jay McInerney September 6, 2014 - 12:40am

Joshua Chaplinsky from New York is reading a lot more during the quarantine September 8, 2014 - 9:02am

Just read that the reason he was dressed up like this at Cannes was because they were shooting, which makes sense, because part of the book takes place at the film festival.