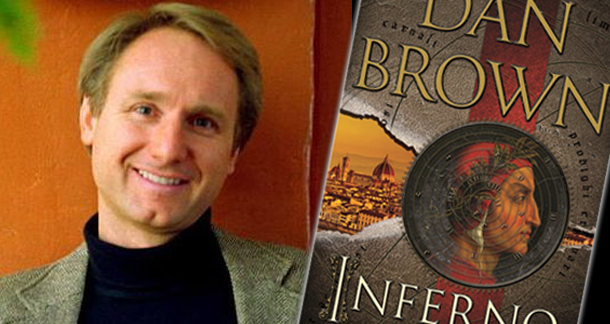 Well, the new Robert Langdon novel is out. You know, the historian and ‘famed symbologist’ who runs around solving mysteries that first came to prominence in The Da Vinci Code. Fans have lapped up subsequent stories (and a prequel) making Dan Brown a wealthy man and his books bestsellers. There’s even been a couple movies based on the Langdon books.

Now comes Inferno based on, you guessed it, the works of Dante Alighieri, taking place in exotic European destinations as Langdon "tries to stop the spread of a deadly virus”. Pre-sales on Amazon alone were enough to boost it to the top of their bestseller lists before the book was actually released, and are reported be almost 25% higher than for his last book.

But — and it’s a big ‘but’ for those people who review books like this for living — it may well be his ‘worst book yet’.

Jake Kerridge in the Daily Telegraph said: "As a stylist, Brown gets better and better: where once he was abysmal, he is now just very poor." And he added: "In the end this is his worst book and for a sad, even noble reason — his ambition here wildly exceeds his ability."

That doesn’t seem to deter the fans, however, with a large number queuing to be the first to buy it in London this morning or pre-ordering it for their Kindle devices and getting it delivered at midnight. And the reviewers concur that readers will just ‘lap it up’.

I had to laugh at the way the Daily Mail put it, though, when their critic described it as "bilge, but one hell of a page turner". Will you read it? I probably will, but I can probably wait for second hand or sale copy, rather than shelling out for the full-price product. Particularly if it’s as bad as they’re saying.

I am have very little interest in his books, other than from interest in the sensation his books cause. I've read The da Vinci Code and Deception Point, and Brown is every bit as bad as they say at writing, but he knows how to plot.

I read Da Vinci Code and Angels & Demons while travelling courtesy of book exchanges. I have to say I liked the ideas behind Da Vinci Code but found the writing pretty bad. I don't remember anything good about Angels & Demons but I do remember saying "oh fuck off" when Langdon used a window shade as parachute and jumped from a helicopter.

His books are obviously review proof and will sell no matter what people say.

He looks like a nice guy. Untroubled by that massive dent in his chin. On his writing days he probably presses it with his index finger whilst peering up at his fifteen thirty foot ceilings, brow properly furrowed, seeking that next perfect word.