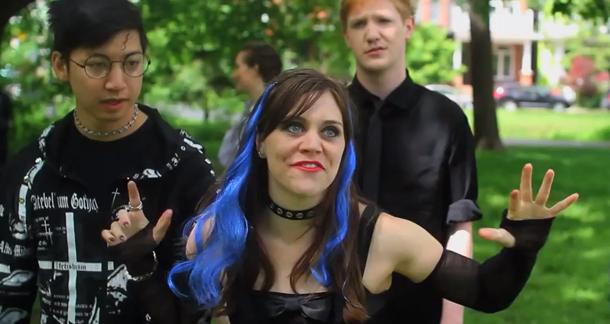 If something is really dreadful, it's almost a sure-fire hit. I can name plenty of examples, but I won't. Let's focus on just one for the moment—the 'infamous' Harry Potter fanfic My Immortal, which, according to Brooke Jaffe at The Mary Sue, is considered "the worst fanfic ever written," has been adapted into a web series.

Now, mind you, from the looks of the series' trailer (see below), this appears to be a more tongue-in-cheek adaptation of My Immortal. I'm not saying this is exactly the same thing as Robert Altman's take on The Long Goodbye—whereby the director both faithfully adapts and satirizes Raymond Chandler's novel—but it's in the same vein. Here's a description from Jaffe:

Faithful to the spelling errors, plot holes, gothy clothes, hyperbolic characters, and an incredibly OOC Harry Potter universe, the webseries captures the best-worst aspects of its source material and puts them all on display. From the heroines inability to pronounce her own name, Hagrid’s satanic faith, and non-dancing goths, it’s all here.

And yeah, the show does look pretty funny. Check out the trailer, and if you're game, head over to the creator's YouTube page and watch the first three episodes.

Anyone familiar with this fanfic? Have you read it? Is it as awful as they say?

After watching the first three episodes, I had to see what the actual fic was like. I just watched a dramatic reading of the entire fan fic. I don't think I've laughed that hard in a long time. If the videos keep the insanity of the fic the series will be pure gold.

They have the pixies? Is that shit cheap?