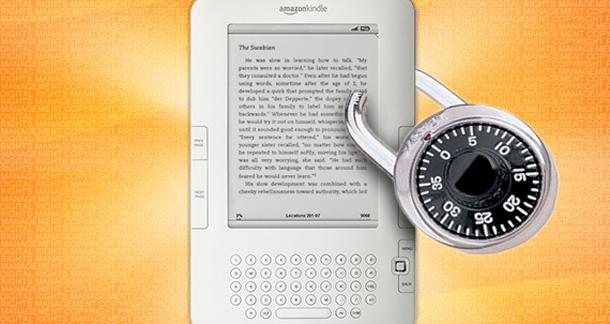 Independent bookstores Book House of Stuyvesant Plaza in Albany, NY, Fiction Addiction in Greenville, SC, and Posman Books in New York City have filed a class action lawsuit against Amazon and the Big Six publishers--Random House, Penguin, Hachette, HarperCollins, Simon & Schuster and Macmillan. According to The Huffington Post, the retailers and their lawyer Alyson Decker claim that "by entering into confidential agreements with the Big Six publishers, who control approximately 60 percent of print book revenue in the U.S., Amazon has created a monopoly in the marketplace that is designed to control prices and destroy independent booksellers."

Their solution to the problem is clear: remove Digital Rights Management locks from all eBooks so that indie stores can sell them to customers freely, without concern for their choice of eReader. In this way, the customer always owns their digital book, and will always have access to it, even if they switch from Kindle to Nook or Kobo, for instance.

Should the booksellers win their lawsuit, the eBook marketplace would become a very different landscape. Amazon would no longer enjoy what many call a monopoly, and non-corporate brick-and-mortar stores could actually have a foot in the game. According to Cory Doctorow, however, the case could be mired from the get-go for using the term “open-source DRM” in the lawsuit, since there is no such thing.

Who here would purchase eBooks from their favorite local bookstore if you had that option available?

I'd much rather buy eBooks from an independent store. I hate Amazon's stupid proprietary format, mostly because I don't own or plan to own a Kindle, and I'd much rather give the support to small businesses.

I'm honestly a bit surprised this didn't happen sooner. As a communications law student, I'll be watching this case closely. Thanks for the update.

If it is a monopoly im def. against it. Never agreed with deregulation of this sort of corporate growth.

Dwayne from Cincinnati, Ohio (suburbs) is reading books that rotate to often to keep this updated February 22, 2013 - 9:02pm

I for one welcome my our new Kindle overlords. No joke, I love the Mobi file format, and my eInk Kindle. The idea of going some place for them seems just crazy.