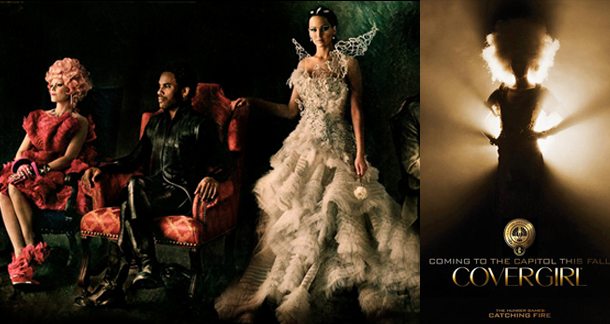 Movie sponsorship or product tie-ins are nothing new, at least not in the last thirty-odd years (remember all the Star Wars toys? No?), but as a bloke, this one seems a bit on the odd side. With The Hunger Games: Catching Fire coming in November, Lionsgate, the company behind the Hunger Games adaptations, has signed a deal with makeup giant CoverGirl.

The result is going to be a line of cosmetics based on the “crazybananapants looks of the Capitol’s classiest citizens” called — wait for it — the ‘Capitol Collection’.

We are excited to announce COVERGIRL as the exclusive makeup partner for The Hunger Games: Catching Fire. The exquisite beauty and style in the world of the Capitol is a focal point of this film. Partnering with an innovative brand like COVERGIRL to create an additional layer of beauty storytelling and inspiration for the fans is new territory that we’re delighted to explore.”

Apparently, the cast will be wearing CoverGirl makeup in the new part of the trilogy. Well, they have to wear something. And it’s not the first time they’ve tied up with this sort of company: Lionsgate had already done a deal on the last movie for a nail polish line called “Colours of the Capitol”.

Okay, I’ve worn my share of makeup over the years (don’t ask) but I doubt I’d have bought it based on a movie tie-in, well, unless it was The Crow, or something, anyway… no, not even then. Does this mean we’re going to see tons of adolescents wearing this stuff on the streets? The way I read the books, the Capitol’s styles weren’t necessarily something to be emulated…

Joshua Chaplinsky from New York is reading a lot more during the quarantine May 24, 2013 - 7:11am

But aren't the citizens of Capitol... not people you want your kids emulating?

I liked the nail polish collection China Glaze came out with for Hunger Games, but they were colors that represented the districts. At least with that you could "support" the oppressed groups, and cheer them on. Even if you knew they would die by the end :-/

Dwayne from Cincinnati, Ohio (suburbs) is reading books that rotate to often to keep this updated May 26, 2013 - 7:53am

They aren't really my style, but not everyone from the Capitol was evil. Cinna was a really nice guy and important to the resistance.

There are a lot of people out there who love to get creative with their makeup and here you click and buy makeup products at affordable prices. It’s not uncommon for someone to have a favorite character they want to recreate, or have some other idea in mind when it comes time for them to do their makeup. But the latest trend is taking things one step too far! The Hunger Games movie has been so popular that people are now doing “Hunger Games” themed makeup transformations and posting them on the internet. This might be going a little bit too far, don’t you think?