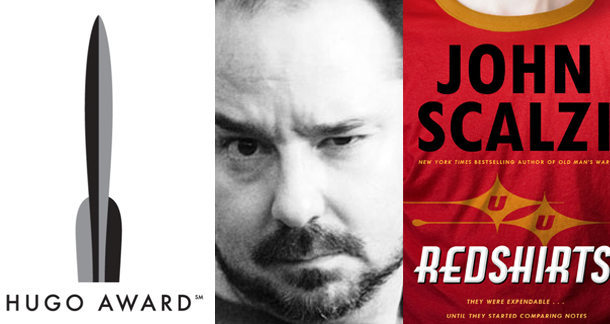 Awards are usually divisive. You argue amongst yourselves as to whether so-and-so deserved the award more than him—you know, the one that’s with her? The answer is usually not agreed on. I can take awards or leave them but at least the Hugos, which were announced on Sunday, make an effort to get a consensus.

John Scalzi, known do-gooder and anti-troll campaigner on these interwebz, is also a prominent writer (go read Old Man’s War if you don’t believe me) and he won the overall award for best novel for Redshirts, a comic take on the old Star Trek cliché that the guys in red shirts always get killed off. Also of note: Pat Cadigan got an award (much deserved) for her ‘novellette’ The Girl-Thing Who Went Out for Sushi, Ken Liu got best short story for Mono no Aware and Brandon Sanderson got best novella for The Emperor’s Soul.

The voting is a bit convoluted, but the awards are chosen by people who go to the annual WorldCons, i.e. the general public. What? No panel of experts? High-profile judges? Elitist persons? This, of course, makes it open to criticism by some.

Author Charles Stross, himself nominated for Hugos half a dozen times, said of the Hugos. "It's a beauty contest … Fun, but shouldn't be taken too seriously."

Not everyone agrees, of course,

And that’s what I like about them – it’s not somebody telling me that this is the best book ever. It’s a group of people, kinda like me, basically recommending some excellent things to read. In this day and age of social media and getting recommendations from friends and sites like Goodreads, that’s just par for the course, isn’t it? Or is it just me?