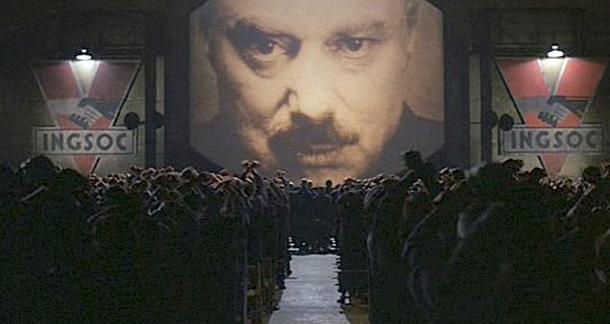 Dystopian lit seems to be all the rage--what with that Battle Royale ripoff The Hunger Games hitting theaters today--and we've just learned that Imagine Entertainment and LBI Entertainment are teaming up to consider a new film adaptation of 1984.

Imagine is headed up by Brian Grazer and Ron Howard. Shepard Fairey, the street artist best known for the Barack Obama "Hope" poster, got the ball rolling on the project, and may serve as a producer.

If I have to tell you what 1984 is about, what are you even doing here? But just in case, it's George Orwell's seminal novel about Winston Smith, a man who lives under a totalitarian regime in the fictional country of Oceania. The book was influenced by Orwell's fear that British democracy wouldn't survive World War II. It's a very good book. You should read it if you haven't.

This isn't the first time 1984 has been adapted for screen. It's been the subject of two films--one in 1956, starring Edmond O'Brien as Smith, and another in 1984 (heh) starring John Hurt in the lead role. It's also been adapted for television a few times.

Personally, I'm crossing my fingers for 1984 starring Jason Statham, from the directors of Crank. How awesome would that be?!

Seriously though, do you think this could use a cinematic update? Who would you like to see in the role of Winston Smith?

Joshua Chaplinsky from New York is reading a lot more during the quarantine March 23, 2012 - 7:37am

The 1984 version of 1984 is pretty decent, but I wouldn't be against an update. I'll be casting my vote for Michael Fassbinder as Smith. All it needs is a kick-ass director. Cronenberg? Tomas Alfredson? Nicolas Winding Refn?

Class Director
Rob from New York City is reading at a fast enough pace it would be cumbersome to update this March 23, 2012 - 8:03am

Michael Fassbender would be a great choice, and not just because he's dreamy.

Joshua Chaplinsky from New York is reading a lot more during the quarantine March 23, 2012 - 8:11am

And Rooney Mara as as Julia.

David Fincher should reunite with Edward Norton for this one.

Typewriter Demigod from London is reading "White Noise" by DeLilo, "Moby-Dick" by Hermann Mellivile and "Uylsses" by Joyce March 23, 2012 - 2:17pm

edsikov from New York by way of Natrona Hts PA is reading absolutely nothing March 24, 2012 - 1:49pm

Is Liam Neeson too old?

I don't see why you would need to do another remake. The 1984 version with John Hurt was an amazing film; it captured all beauty, emotion and abject terror of the book.

Besides, what will top-notch CGI and 3D provide that could ever replace great acting?

Dwayne from Cincinnati, Ohio (suburbs) is reading books that rotate to often to keep this updated March 27, 2012 - 7:31pm

Who do you guys think they'll actually get? Not who do we want, but who they put on it?

Sounds amazing? Just don't butcher the book, or forget to mention the underlying theories behind it!