Hobbit Premiere Overshadowed by Protests and Allegations of Animal Cruelty 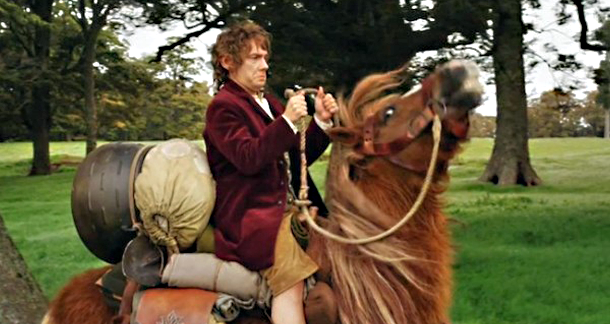 New controversy has erupted over the imminent release of the first movie in Peter Jackson’s The Hobbit trilogy - primarily over accusations that the production company behind the films is responsible for more than two dozen animal deaths.

With the New Zealand premiere just days away (it opens there on the 28th) and companies like Air New Zealand hoping to capitalize on the excitement surrounding the film, the allegations couldn’t come at a worse time.

Jackson and his press team have leapt into action and released a statement:

'Extraordinary measures were taken to make sure that animals were not used during action sequences or any other sequence that might create undue stress for the animals involved,' Jackson has said, going on to point out that more than half of the shots of animals in the film were computer-generated.

To complicate matters, the ‘animal wranglers’ who worked on the film have admitted that no animals were harmed during filming - they are, however, blaming the production company for deaths of sheep, chickens, goats and horses that were kept at a nearby farm. And they’ve got People for the Ethical Treatment of Animals (Peta) on their side, the main group behind the protests planned for New Zealand, the US and Britain. They’re also calling for full CGI in all scenes where animals are involved.

In response, Warner Brothers and New Line Cinema also put out a statement, saying the allegations

can be traced to freelance animal wranglers who were dismissed by the production over a year ago.

So, unless Peta can produce proof to back up their accusations, it’s unlikely to be cleared up before the premieres, but is it likely to affect the number of people going to see The Hobbit? I’d say probably not.

And as they say, no publicity is bad publicity. Even protests.

I actually know a lot of people (including myself) that aren't going to see it because of this! No matter how much i want to.. sigh.

Joshua Chaplinsky from New York is reading a lot more during the quarantine November 26, 2012 - 10:46am

But is boycotting actually going to accomplish anything? And it's not like these deaths were wide scale or malicious. Wouldn't it be better to have a constructive dialog with the involved parties about how things can be improved instead of witch hunting? Why deprive yourself of hobbity goodness?

Man, I really hate to bring this up, but The Dark Knight Rises had a record-breaking opening despite the Aurora shootings.

I highly doubt these allegations will hurt The Hobbit's numbers.

I really think "overshadowed" is a bit strong.  Not only is it PETA, which has no legitimacy whatsoever, but there's no actual proof of any wrongdoing or malicious intent.  They protest EVERYTHING.  This will not hurt the box-office return at all--nor should it, since there's nothing to show anybody did anything wrong.  The very worst-case scenario is that freelance wranglers let animals die, and were then dismissed by the production team.  How was this supposed to be handled differently?  Their goal is to have no animals used in any way by anybody; that's not feasible, and failing to meet that benchmark doesn't denote animal cruelty.