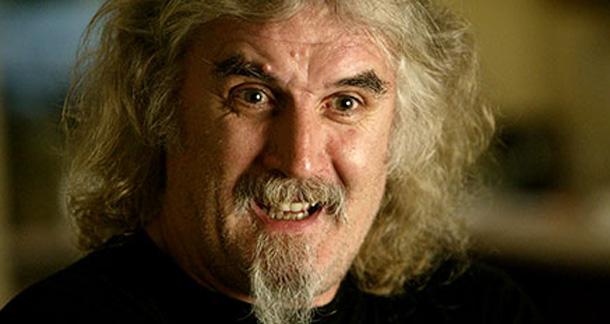 Scottish actor Billy Connolly is playing Dain Ironfoot in the upcoming film adaptation of The Hobbit. But he's not exactly a huge fan of the source material.

"I could never read Tolkien. I always found him unreadable … I didn't read [the books], and I normally don't like people who have! The people who love it, they're kind of scary. They talk all this gobbledygook and they think of it as the Holy Grail."

There's more at the link, but lest you think he's completely disagreeable, he does say that the script and Martin Freeman, who's portraying Bilbo Baggins, are "brilliant."

What do you think? Is Tolkien overrated? Is he a slog to get through? Or is Connolly off base?

I just started reading the Hobbit for the first time. I understand Connolly's arguement. The way it is narrated is a mess but I love it. I like how he switches between 3rd and 2nd person. It makes it feel like a campfire story, which would make sense in the world it belongs to.

Dino Parenti from Los Angeles is reading Everything He Gets His Hands On September 25, 2012 - 11:27am

I'm reading The Hobbit now, and while , it definately lists towards the dry at times--certainly for a fantasy novel--I wouldn't call it unreadable. Tolkien was an incredibly intelligent man, and it can't help but show, and perhaps that lends it a weight not usually found in fantasy novels with his use of phrasing and very deliberate pacing. That said, I never feel lost or talked down to as a reader--two things of which the opposites for me truly make a book unreadable.

As I've read 'Lord of the Rings' and 'The Hobbit,' I clearly would disagree on his unreadable point, but the man is entitled to his opinion. I really don't think that his not liking the books will affect the movies much. All that matters as far as making it a faithful adaptation is that Jackson loves the material, which he obviously does, and all that matters as far as making 'The Hobbit' good films is that those involved believe in the project, which they seem to.

Connolly is a skilled comedian and actor, and I'll trust his opinions on humor and performance. For literary critiques, I'll look elsewhere.

You can call Tolkien many things. I have no trouble criticizing him. But unreadable he is not.

this dude is all about bad choices. did anyone see Boondock Saints 2?! That movie was fucking awful, stereotypical...GAH! F U, Mr. Connolly.

I'll post a summary of what I said about this on facebook. The man is the most god-boring live comedian I've ever seen. I fell asleep during a 5 hour show he did at the Opera House in Australia in a very uncomfy seat. Imagine being screamed at for 5 hours by a Glaswegian man, and you're in the worst fold up chair in existence. I fell asleep during THAT. Oh the irony Billy!

I used to like the Big Yin back in the days when he was funny, but he's become more annoying, and far less funny, in his opinions over the years.  I have no problem with him disliking the books, nor disliking the writing style of Tolkien. I have always loved the books, but I know a lot of people whose opinion on literature I respect, who aren't particularly fans and that's cool.  But the comment about not liking people who have read the books just comes across as being a bit of a twat.

i dont undrestand why you'd want to be involved in making this movie if you dont like the writer, the book, or the fans. oh wait...you're a fame/money whore. nevermind.

I read Lord Of The Rings but not The Hobbit. I didn't have any problem reading those books.

Andrew Riley from Haverhill, MA is reading A Clash of Kings, The Goddess vs. The Alphabet, God is not One, Plato's Secret September 26, 2012 - 5:09am

The Hobbit? I don't know how you can't get through that. It's narrative weakness notwithstanding it's a delightful romp. Lord of the Rings, I can see. Tolkien, however brilliant, tended to write long passages on history and lineage that interrupt the narrative flow. But then again, so didn't Melville in Moby Dick on whaling and cetaceans, and the Russians.... Have you read Anna Karenina? I'm pretty sure there's a history book on landownership to be extracted from that.

edsikov from New York by way of Natrona Hts PA is reading absolutely nothing September 26, 2012 - 11:20am

Dissing THE HOBBIT?! The man is obviously mad. Mad, I tell you - mad!

read the Hobbit a couple of times, but could never make it through Lord of the Rings. Not at all to my taste, and I've endured some pretty bad fantasy over the years, as well as having read plenty of other unreadable texts.

I wouldn't say Tolkien is an easy read, but it's definitely worth it. This guy has obviously not actually met that many fans, though.