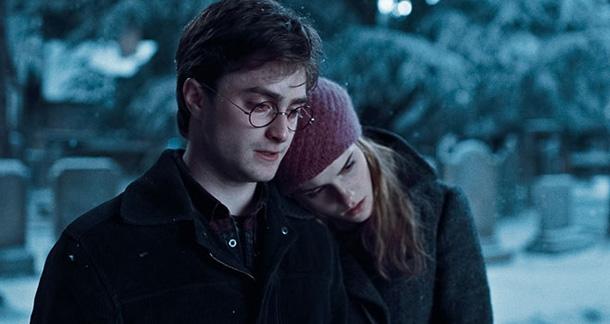 When the Harry Potter series ended, many fans were left disappointed by the fact that Hermione Granger, the wizard played by Emma Watson in the film series, ended up with Harry's friend, Ron Weasley, instead of Potter himself. As it turns out, those fans have someone at the top that feels the same way: series creator J.K. Rowling.

In a recent interview with Rowling in Wonderland Magazine, Rowling told Watson "I wrote the Hermione/Ron relationship as a form of wish fulfillment [...] That’s how it was conceived, really. For reasons that have very little to do with literature and far more to do with me clinging to the plot as I first imagined it, Hermione ended up with Ron."

As it stands, Rowling's admission of the mistake will likely be the only reassurance Harry/Hermione fans will get about the couple's potential relationship. A later series of books with a divorced, middle-aged Hermione and a sulking, heartbroken and single Harry Potter where the two finally end up together only currently exist as the plot line of approximately 543,963 fan fiction stories.

I believe that Watson and Radcliffe had a much better on screen chemistry, but I enjoyed the reality of their relationship. It kept an otherwise magical story grounded.

Dwayne from Cincinnati, Ohio (suburbs) is reading books that rotate to often to keep this updated February 3, 2014 - 4:15pm

It seems she might have made the right choice for the wrong reasons; I thought it was a great throw in for realism.

People on Twitter are being a little too dramatic about her statement. I think it is pretty silly. She can't be the only author who wishes she could go back and change something. In fact, I remember reading an interview with a different teen author (can't remember who it was) that had a similar revelation. There was regret about not killing off a character, if I remember correctly (and this isn't the Ron Weasley one with JKR. I'm pretty sure it was a different series). And I agree with Tom. Emma Watson and Daniel Radcliffe had better chemistry on screen. Their moments together, in the 7th and 8th film, were some of my favorite. There were moments when I was rooting for them to get together, but I knew that it wouldn't happen because canon, duh. Haha. There is a book I wrote, which is thankfully out of print now, that I spent years wishing I could go back and change. It is hard to let go, but eventually we have to.

Um, hate to say it, but this article's title is completely wrong. She never said "Hermione should have gone with Harry" she said "Perhaps Hermione being with Ron was a bit of wish fullfillment on my part." Come on... A better title would be "Rowling Second Guesses Hermione and Ron's Relationship."