Healing Through Writing for Teens 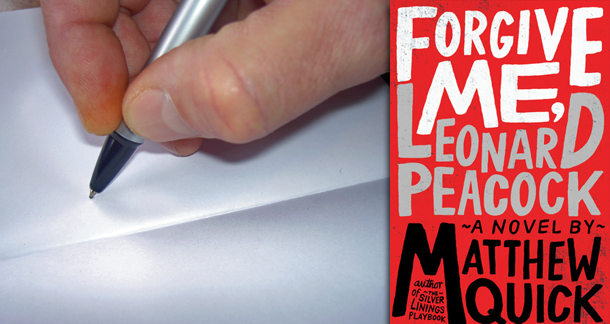 Authors often start early, scribbling or typing at every opportunity — I know I did. Thankfully a lot of those scribbled journals and bad poems have disappeared, never to see the light of day. Matthew Quick, New York Times bestselling author of The Silver Linings Playbook, did too, and his latest novel, Forgive Me, Leonard Peacock, deals with a troubled youth who brings a gun to school. In an article on HuffPo, he talks about the healing effect writing can have on teenagers, what he’s seen them do in his teaching experience and how it helped him during his own dark time.

When I was a high school English teacher, each year there were always one or two students who needed to write, just like they needed to breathe air. These kids would furiously scribble words into notebooks and punch keyboards regardless of whether they had been assigned a writing project or not. They simply could not stop. They were driven by something within that seemed to trump the demands of teachers and parents and the system at large. For them, writing often felt like a matter of life and death, and yet no matter how hard they tried, they just couldn't get the majority of the world to understand their intense feelings, which were always on full naked display in their creative works

The teenage lead character of Forgive Me..., the eponymous Leonard Peacock, “is clearly in crisis and needs to vent, which he tries very hard to do throughout the novel, both via conversation and the written word”. Sound familiar? As far as I can remember, a number of the recent cases where kids went into school and killed classmates, then themselves, included some kind of written word, whether blogs or journals or polemics. Unfortunately, their writing didn’t provide the healing Quick describes.

A teacher probably saved him by typing up his poems and entering them in a contest — which he won. That little act (and the teacher) is one he will never forget and I like what he says about how it changed him. “The great storms still occasionally swell in my mind and chest, and all these years later, I'm still going to the page to sort everything out and attempt to feel less alone.”

Did writing change your life? It’s certainly the one thing I can look back at and point to in my life that has remained constant since the age of about 12. While I don’t scribble so much anymore, I do write almost every day, in one form or another. What do you do?