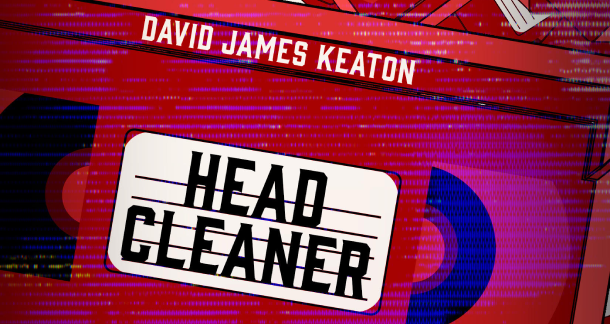 I mean, "cover reveal" is a bit of a misnomer, since technically the surprise has been spoiled by a certain big box online retailer, but at least they don't have an exclusive excerpt, right? Right? Answer: They'd better not! But just in case, I'm stealing their synopsis, which, to be fair, probably came from the publisher, so...

HEAD CLEANER is a hugely original blend of thriller, science fiction, and horror that takes our love of nostalgia to task for its morbid obsessions with dead media and dead-end jobs: Clerks meets Black Mirror (with a little Groundhog Day and Russian Doll thrown in for good measure):

The last Blockbuster video store in the United States is hanging on by a thread. And after a crazy night attempting to track down a lost VCR rental to collect the record-setting and internet-famous late fee, three employees, idealistic Eva, cinephile Jerry, and their tyrannical manager Randy, discover that this machine may actually have the power to change the endings of popular films, which, depending on the historical basis of the film, might also be changing the real world around them.

Or could this just be an elaborate, increasingly deadly prank?

When they begin receiving videotapes and voicemails seemingly depicting their deaths, Eva, Jerry, and Randy scramble to keep the VCR from falling into the wrong hands. And as one action-packed evening begins to seemingly repeat itself (or does it?), scores are settled and unwanted confessions begin to fly, until a Final Girl finally unravels a grand psychological experiment orchestrated at the highest levels of a crumbling social media empire. 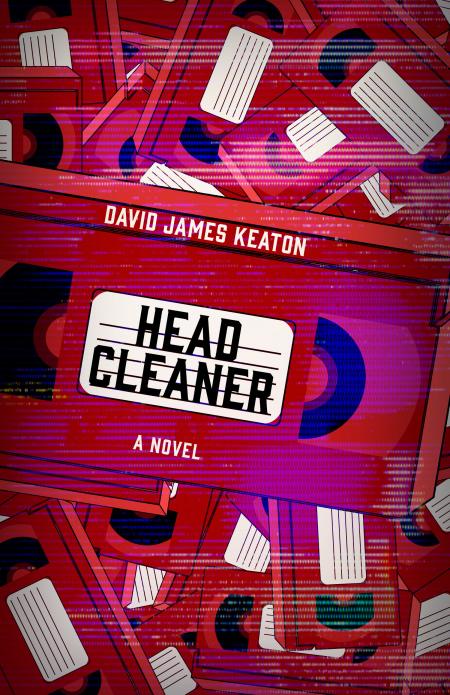 Hell, even their claim to fame as the “last Blockbuster” wasn’t really accurate, for several reasons. Their franchise was technically a Showcase Video, turned Family Video, turned Hollywood Video, all previous charters who’d lived and died on the very same corner lot, cycling through Grand Openings, Blowout Sales, and Grand Closings like that GIF of the fruit bowl rotting then reversing to burst back to life (or was that a dead fox?). And for their latest incarnation as the long-lost member of the Blockbuster family, Randy, their owner/operator, originally tried to come up with uniforms somewhat resembling Hollywood Video colors, all purples and blacks. But, in a stoke of dumb luck, Randy’s uncle already had a bunch of blue button-down shirts from a carpet-cleaning scam. And Randy had also recently cannibalized the other two shuttered Blockbusters in their town for most of their in-store signage. So, fuck it, they were magically anointed a fresh, baby-blue “Blockbuster.” Even if they technically weren’t really the same species, they were at least all the same genus:

Sour-faced clerks, judgmental rental encounters, sticky, fingerprint-stained rows of used movies for sale because no one rented them anymore (a marketing strategy Jerry always thought was hilarious; asking someone to make something a permanent part of their life when they didn’t even give enough of a shit to let it spend the night), and, of course, “top dead center” in the middle of it all, the lonely, befouled islet where employees were seemingly stranded forever. At least until the whistle blew and they ducked under the counter like barkeeps to make their short-lived escape, never mind sneaking that mad dash for the shamefully exposed toilet planted in the middle of their skylight-bright storeroom, conspicuously on display like the golden idol Indiana Jones traded for a splash of sand, which was essentially the same sound their boss Randy’s acrid offering would make against the hollow throat of that porcelain god when he had to open the store after a long night of drinking.

But, hey, business could have been worse! Because they were the last of their kind, their very existence inherently a bit of a performance, not entirely unlike the ’80s-theme café in Back to the Future II, the middle of the trilogy that Jerry called “the porridge that was just wrong.” But Generation X, Y, and particularly those post-postmodern Millennials, all worked together to keep their little video store kicking, if not exactly living. A Gen Xer himself, Jerry still had his own respectable collection of VHS films at home (Eva was proud to still have a pile of DVDs). But if pressed, Jerry guessed the video-store worship sort of suited Millennials best, with their addiction to posting online about animal rescues and such, though they’d clearly abandoned physical media entirely and rarely actually rented anything. But they could be counted on to burst in for spontaneous selfies with the excellent free production value of vintage posters, not to mention a real, live working museum. A caveman exhibit with real cavemen (and movies about cavemen).

He still fantasized about the Greatest Closing Shift of All Time, an incident from three years ago when she absent-mindedly scratched his back as he stuffed dimes into some bank wrappers.

But Jerry never noticed as much nostalgia for the actual business as there seemed to be for the colorful and ornate tombstones memorializing it, as he’d spent that decade or so bouncing from dead video store to merely dying video store for as long as he could, dodging any reminders that actual careers existed, trading any fruitful vocation for the (mercifully scarce) humiliation of ringing up a former high-school classmate. This had happened twice. Someone would probably call him directionless. And maybe he was.

But not when it came to Eva.

Sure, Eva was barely his friend. And sometimes she’d sleepwalk through her job or look right through him like he wasn’t there, and once, after years of working side-by-side, she even forgot his name mid-forgery when she was trying to sign one of his paychecks over to herself… but sometimes, in his head, her name took some strange turns, too, occasionally transforming into a more affected, lyrical sound, that soft “e” like in “lemon,” or “Ever.”

He’d made this exact same declaration to the boss once, and it sounded way more threatening than he intended. Randy even made him swear never to say that again out loud. But, basically, in spite of being more or less a fuck-up and inexcusably terrible at a mostly effortless job where everyone else was mediocre, Eva was a harmless obsession, with similar taste and movie knowledge, and somehow still out of his league. And if that meant he settled for following her from doomed job to doomed job (or in the last couple cases, jumping ship a split-second before the iceberg, then convincing Randy to hire her on again on the next boat) then that would just have to do. It didn’t feel like stalking because, hey, it was just something he did. Something they did. Together.

He worked with Eva. He loved the sound of that.

He still fantasized about the Greatest Closing Shift of All Time, an incident from three years ago when she absent-mindedly scratched his back as he stuffed dimes into some bank wrappers. He still had trouble making accurate change in stressful situations. And if there were dimes involved? Forget about it.

“Enough of the phone, Eva,” he said finally, pretending to push her away. “Wait, I know, let’s play ‘Fix a Movie with One Line of Dialogue.’”

“Fine, your loss.” She gave him a snort, a signal that she wasn’t into it but not totally opposed. Anything to move the clock, after all. She pocketed her phone for now.

“How about we start by fixing the Scream movies instead, so that the voice disguiser doesn’t sound like an ‘80s RV salesman,” she said. “Something I’ve never actually heard in my fucking life by the way.” 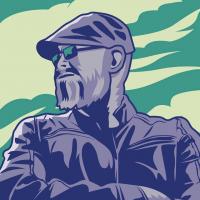 “Done. Can we play my game though?”

“Okay, fix The Matrix in one line.”

“Which Matrix? There’s, what, nine now?”

“Easy. Neo says, ‘What are you trying to tell me? That I can dodge bullets?’ And Morpheus replies, ‘No, Neo. I'm trying to tell you that when you're ready, you won't have to.’ And Neo goes, ‘No, seriously, in case I get shot, is that a yes or a no, bro?’”

Eva half-smiled and half-nodded a “not bad.”

“I got one,” she said. “When Neo takes a punch and says to Morpheus, ‘Hey, I thought you said it wasn’t real!’ And Morpheus is like, ‘Your mind makes it real.’ Neo’s all like, ‘If you’re killed in the Matrix, do you die here?’ And Morpheus is like, ‘The body cannot live without the mind, dummy.’ And Neo’s goes, ‘Duuude, who do I have to blow to get a straight answer?’”

Jerry snarfed, grateful he’d lost his favorite water bottle or he would have been compulsively hydrating at that moment and would have certainly succumbed to a vaudevillian spit take. Instead, he just pursed his lips and smiled. Tonight was good. Good enough anyway. He didn’t understand why so many people frowned on dead-end careers when they provided such pleasures.

“It’s what we do,” he told his mom once. “We work at every video store that’s left, right before they die.” As usual, Jerry didn’t understand this sounded way more terrifying out loud.

“I got it,” Eva said. “How about Morpheus stops all his bullshit riddles and just turns to the audience and goes, ‘You and this place, you’ll die together.’”

Jerry stared at her for more than ten seconds, breaking his own rule. It was like Goose from Top Gun had walked over his grave. He wondered if she saw him shudder.

But Jerry never could have guessed he was going to die long before the Last Blockbuster did, no matter how many times Eva joked about their expiration date, a forecast that sounded kind of hopeful really, depending on how soon it happened to him, and, most importantly, if she’d be watching.

Am Robert Mitchell USA , How i purchased Willy Wonka Golden Ticket from Wal-Mart #2605 in Gallipolis and won $15,000, It still feels incredible that my life has changed and I thank Dr Prince  everyday for his help. It is the best feeling in the world knowing that I am financially secure.Dr.Prince has proved that all the comment that i have read about him are all true, I am saying this now because before i contacted Dr.Prince i was having doubts if all what i have read about Dr.Prince are true but after contacting him, i believed that Dr.Price  is truly powerful and his spell has the capability to Win all kinds of lottery All thanks Dr prince, his number +18144484537 This Man has been of immense blessing to me and my friends and i am putting his email here to help the world at large know about his abilities and power to solve various types of problems contact him today via website https://obinnaspelltemple.com/ obinnaspelltemple@yahoo.com