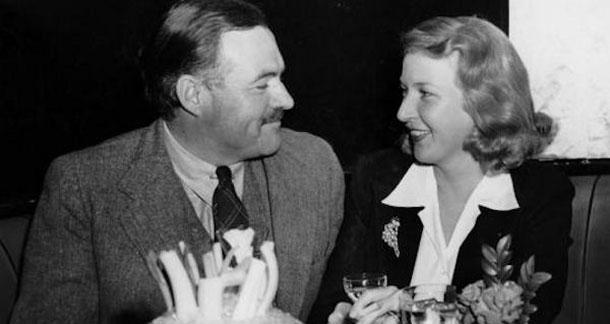 HBO is out with a trailer for Hemingway & Gellhorn, starring Clive Owen as novelist Ernest Hemingway and Nicole Kidman as war correspondent Martha Gellhorn. The movie hits on May 28.

Here's more on the film, from The Olive Press:

Their five-year marriage first saw them travel to Spain to record some of the most famous reports on the Spanish Civil War between 1936 and 1939.

Gellhorn was the only woman ever to ask Hemingway for a divorce and she inspired him to write his most famous novel, For Whom the Bell Tolls.

Besides Owen and Kidman, the movie stars David Strathairn, Parker Posey, Robert Duvall and... Metallica's Lars Ulrich? (Lars is playing Joris Ivens, the Dutch documentary filmmaker and committed communist. When I watched the trailer I saw him and thought, "That looks like Lars Ulrich. I wonder who it actually is." So yes. Weird.)

I'm not really bowled over by the trailer--it certainly looks nice, but there's nothing about it that really grabs me. Still, it's an HBO production, and they're generally good about this kind of thing. Also, Clive Owen.

Check out the trailer, then head down to the comments and tell us what you think.

Oh! This is exciting. I have a copy of The Hemingway Women I have yet to crack open and read...

misterwoe from Kansas but living in Athens, Greece is reading Perdido Street Station by China Mieville, Inside the Third Reich by Albert Speer, A Wolverine is Eating My Leg by Tim Cahill April 23, 2012 - 10:43pm

This looks great. Clive Owen is perfect as Hemingway. For Whom the Bell Tolls was also written after his father's suicide, which had a partial influence on the book. It will be interesting to see if they caught that in the movie.

@SparrowStark: What are you waiting for?

Kasey from the morally and physically challenging plains of Texas is reading 12pt. Courier font April 24, 2012 - 12:05am

I'll watch anything with Clive in it. Even with that stupid porn-stache.