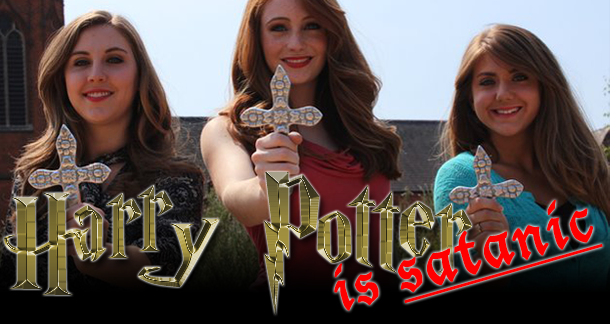 I keep thinking I’ve seen it all, then something else comes along: three teenage girls with black belts and degrees in exorcism have just visited London and announced that the city’s youth are at risk from evil spirits thanks to Harry Potter. No, the ‘boy who lived’ isn’t the issue, it’s the spells in the books. Apparently it’s just a symptom of Britain being “a hotbed of occult activity whose origins go back to pagan times”. It's in the Daily Mail, so it must be true.

The three girls from Arizona, Brynne Larson, 18, and sisters Tess and Savannah Scherkenback, aged 18 and 21, are merely following the teachings of their guide, Brynne's father, the Reverend Bob Larson, who’s apparently banished over 15,000 demons. Their opinion of the children’s books is clear.

Savannah explains: “It has been centuries in the making, but I believe it came to a pinnacle with the Harry Potter books.”
“The spells you are reading about are not made up,” adds Tess. “They are real and come from witchcraft.”
Inspired by their religious faith, the young women believe loose morals are a prime cause of demonic possession, and that promiscuity can transmit “sexually transmitted demons” in the same way as physical infections.

My cynical side is all over this, from the fact that the girls are not hard on the eyes to the silver-plated crosses and other merchandise to the courses in exorcism that the Reverend offers ($4,000 a pop, if you’re interested) to the private exorcism sessions ($200 a time) — he’s just exploiting the vulnerable, a charge often leveled at preachers, particularly in the late 20th and early 21st centuries.

It’s also not the first time I’ve heard this kind of witch hunt (sorry) over something allegedly corrupting the youth of today. In my day it was rock and roll that was leading us all to Hell, now it’s Harry Potter. What’ll they pick on next? My Little Pony? Lego?

All I can do is look at the three of them and laugh. That is all there is to it, just pure laughter.

EricWojo from Livonia, Michigan is reading The Brothers Karamazov September 12, 2013 - 6:35am

Note to England: This isn't under Lend/Lease. You can keep 'em.

edsikov from New York by way of Natrona Hts PA is reading absolutely nothing September 12, 2013 - 6:52am

Hello Kitty is clearly the work of Satan. That's obvious.

Joshua Chaplinsky from New York is reading a lot more during the quarantine September 12, 2013 - 7:33am

What can you say other than, 'Jesus Fucking Christ!'

I hope I'm around when one, if not all three, of these young women wakes up, smells the coffee, and writes a book about their Dad's lunacy. Now that'll be some good reading'.

Isn't a little late now?   Rowling is out writing her bad non-fantasy books

This screams an attempt to get a reality TV series.

I would be rich if I had thought of this Teen Exorcist idea first.

Couldn't they jump on something more recent? Why not them MORTAL INSTRUMENTS books?

Incyde Out Boy from Melstrand is reading This Is Your Brain On Music by Daniel J. Levitin September 12, 2013 - 9:17pm

I seen these three girls on T.V. a while back when I actually watched it, and it seems like they truly believe themselves, and the guy they were supposedly exorcizing was obviously an actor. It was quite amusing actually. I think it was on a show called "Taboo". Check it out...

There's a whole show about them on Vice

For those of you asking why they didn't pick something more recent, they just announced a new Harry Potter movie yesterday.