'Harry Potter and the Cursed Child' Casts its Harry, Ron, and Hermione 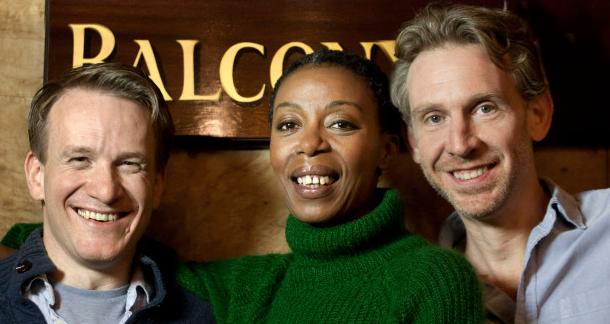 That's right, we finally have casting news for Harry Potter and the Cursed Child! Jamie Parker is set to play Harry Potter—you may recognize him as Scripps from the original cast of the History Boys at the National Theatre and from the subsequent film adaptation in 2006. You can currently find him on the West End playing Sky Masterson in the Savoy's production of Guys and Dolls. Paul Thornley will take on Ron Weasley in the production. Thornley recently portrayed Dodge in the film version of London Road starring Tom Hardy and has been in multiple West End productions. The most exciting casting announcement, however, comes in the form of Hermione Granger: Noma Dumezweni will be bringing the Muggle born witch to life. Dumezweni won an Olivier Award for her supporting role in A Raisin in the Sun and Whovians will recognize her as UNIT Captain Erisa Magambo.

When the casting was announced, many fans were surprised that the play would cast an actress as Hermione that was not the same race as Emma Watson, since she portrayed the character in the film adaptations. However, the play is a continuation of the books, not the films, and many Potter fan theories have seen Hermione as black for years. When asked about the casting on Twitter, Rowling replied with:

This headcanon is extremely popular, especially on sites like Tumblr, and fans have created a treasure trove of beautiful art depicting Hermione as black. Written by J.K. Rowling, Jack Thorne, and John Tiffany, Harry Potter and the Cursed Child is set to debut this summer in London. The story will follow Harry's work at the Ministry of Magic and his son Albus's "struggle with the weight of a family legacy he never wanted." The play will be two parts and according to the website, you can book tickets to see both parts on the same day:

If seeing both Parts over consecutive performances does not work for you, you can choose to see Part One on a Thursday at 7.30pm and book Part Two on an alternative Friday at 7.30pm at a later date.

While nothing has been officially announced, I will be surprised if the production doesn't receive the NTLive treatment or if it is not filmed in some capacity for fans who either cannot afford the price of a West End ticket or cannot make it to London.

What do you think of our new Harry, Ron, and Hermione? Are you interested in seeing the production?