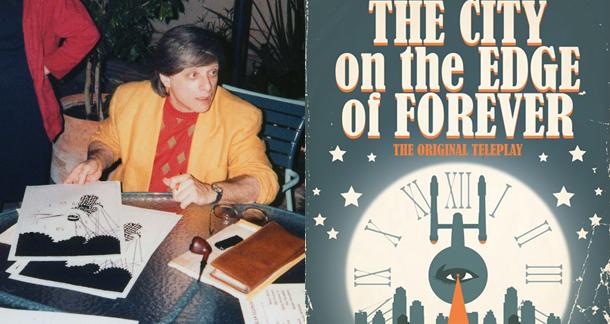 Harlan Ellison is known for pushing the envelope...and usually said envelope is being forcefully shoved in the face of anyone near the septuagenarian author of I Have No Mouth and I Must Scream and the classic (and heavily litigated) short story '"Repent, Harlequin!" Said the Ticktockman'. Ellison has rattled his fair share of cages, but few of his feuds are more famous than the one he had with Star Trek creator Gene Roddenberry, over his teleplay for the 1967 episode "City on The Edge of Forever".

Despite the major cuts and compromises demanded by Roddenberry, Ellison's time-twisting story remains one of the most highly regarded episodes of the series. Still, Ellison hasn't given up the fight to get his original vision out there, and Entertainment Weekly reports comics publisher IDW is giving Ellison a new venue for the story: a five-part comic miniseries.

The series, featuring art by Star Trek comic veteran J.K. Woodward, will present Ellison's original teleplay, including a large storyline about drug dealers and some moral ambiguity for Captain Kirk, things that Roddenberry wouldn't allow for the 1967 broadcast.

Ellison is excited for his story to see print once again, saying:

The graphic novel, I think, is the perfect medium for storytelling, it gives you more range and depth than television…it is as good as the best book you’ve ever read, because the book engages your imagination, and you have to see what’s there in a book. You have to see what’s behind your eyes. Television narrows your vision. The little handheld devices narrow your vision. The handheld device, the Internet, television…have all blurred everyone’s eyes. You go to a movie now, it’s like a physical assault. It’s like being beaten up in the streets of Red Hook. A movie is now six stories high with them throwing shit at you in 3D, rock after rock. To read a graphic novel is to engage your imagination, is to engage all five of your senses, and to picture what the creator dreamed. And that’s what this book does for me.

The series hits shelves in June.