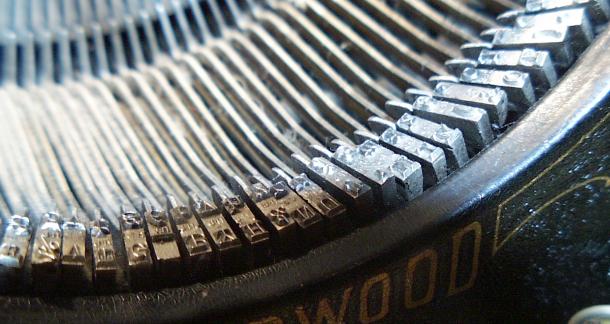 Tom Hanks has joined the hallowed ranks of Kim Kardashian, Tyra Banks, and countless other celebrities who have created and promoted their own apps.

As celeb apps go, Hanx Writer is pretty straightforward.  It asks the question, What if your iPad were a typewriter?

That seems to be the original question, anyway. The question they answered with this app is "What if your iPad made a bunch of typewriter noises?"

Even Hanks himself admits that the noise is only part of a typewriter's charm:

The sound of typing is one reason to own a vintage manual typewriter — alas, there are only three reasons, and none of them are ease or speed. In addition to sound, there is the sheer physical pleasure of typing; it feels just as good as it sounds, the muscles in your hands control the volume and cadence of the aural assault so that the room echoes with the staccato beat of your synapses.

A typewriter app isn't so hot when it comes to the physical nature of typing. "Tickling the 'ol letter-ma-jigs" as no one used to say.

Hanx Writer is free, so it's worth a go, and it's reportedly not an awful word processor. If you download it, let us know how it goes for you.

As tactile pleasure goes, you can always go with LitReactor's own Christine J. Schmidt and take the longhand route.

Sorry, but the appeal for the typewriter to me isn't the noises. It's that fact that you can't you can't browse the internet with it. My focus writer can make typewriter noises.

Of course I prefer the long hand route. (For all kinds of reasons.)

I downloaded it. Spent a brief amount of time with it, and I'm pretty floored. Can't wait to delve into more of its features, as it looks like there's plenty.

Downloaded it last night and it is something fun to play with. I have not really used it for anything, but I just like playing with typewriters. I agree with Sarar Weaver, the long hand route and a fountain pen are magic.

Seems I can't benefit anyway, it's for Itunes.