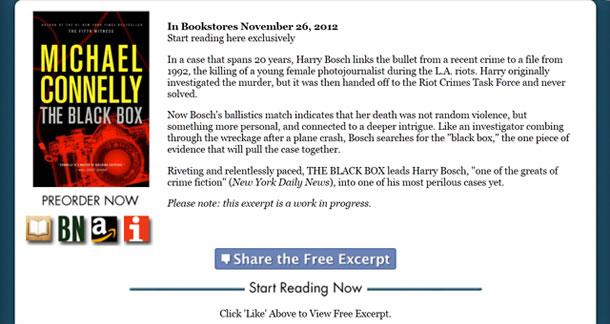 The app also makes it idiot-proof easy to pre-order the books through Amazon, iTunes, Barnes & Noble, or IndieBound, and to share the preview chapters with friends. Though if your Facebook friends are anything like mine, they'll see a 10,000-word novel excerpt smashed between the food photos, cat memes and DJ night event invites in their newsfeed and give it the ole mental TL;DR. Still, you’ve got to give Hachette credit for trying, and given the power of word-of-mouth, it might even work.

The publisher is launching the app with the opening chapters from James Patterson's novel NYPD Red (released October 8) and Michael Connelly's The Black Box (November 26). They're available now. You have to "Like" the author to read the excerpt, which is counter-intuitive to me. If you already "Like" an author, you're probably going to read the book anyway. If you don't, because you're not familiar with their work, wouldn't it make sense to let you read the excerpt first so you can determine whether or not you "Like" them? It's all about exposing readers to new writers.

What do you think: are they going to sell more books this way?

JEFFREY GRANT BARR from Central OR is reading Nothing but fucking Shakespeare, for the rest of my life May 24, 2012 - 8:40pm

They'll sell more books. JP and MC fans will already be buying those books, and giving them a little taste will whet their appetite. So they will almost be a sure thing, while non-fans, or semi-regular readers, most of whom are probably on FB - they just might be inspired to grab a book if it catches their eye. Especially if there's a discounted link to Amazon or something right at the end of the chapter.