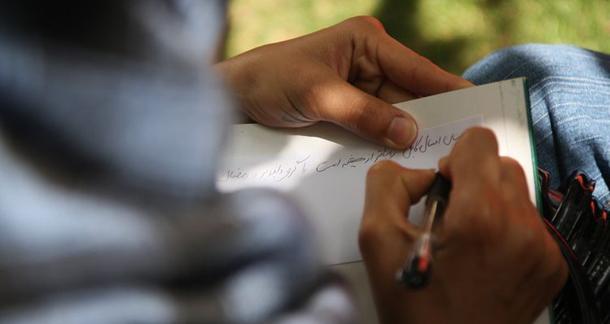 Though dangerous to their safety, women in rural Afghanistan continue to write. According to an article in The Huffington Post (reprinted from Dowser), anonymity is preserved through groups like Miram Baheer—the country's largest literary society for women, operated by a team of journalists, professors, and parliamentarians in Kabul—and the Afghan Women's Writing Project (AWWP), which offers workshops and resources, as well as broadcasts of Miram Baheer meetings over the radio for women who cannot attend. Collectively, the groups boast over 450 members, mainly women from the outlying provinces.

For many rural women in Afghanistan, these secret networks and the poetry broadcasts are their only form of education. U.N. investigations revealed that only 12 percent of Afghan women are literate.

But, thanks to volunteer translators and journalists, contemporary Afghan women’s poetry can now reach global audiences. For example, the June 2013 issue of Poetry magazine was dedicated to landays—vitriolic, two-line verses traditionally recited by Afghan women at the river, the well, or private gatherings…

The tradition of landays provides some level of anonymity for women because they are collective. They are recited and shared rather than attributed to a single poet.

Even still, the dangers of these recitations are palpable. Over the last year, Cuen reports, many poets were killed by male relatives. In one instance, a Miram Baheer member, Rahila Muska, committed suicide by self-immolation, a protest against male brutality against female writers. Muska had been attacked by her brothers after they discovered her writing.

Despite this, Don Share, editor of Poetry Magazine, says the women willingly offered their work for publication. It seems the desire to have the collective voice heard outweighs personal fears of retribution.

Anyone familiar with landays or Afghan women's writing in general?

I'm not familiar, but I think this is wonderful. I've recently become aware of the Afghan women's cycling team, which is another simple thing we often take for granted, but puts their lives at risk. There are a lot of brave women in Afghanistan, and it is exciting to know that we will have the opportunity to read their stories and know more about these women who are fighting battles most Western women cannot imagine.