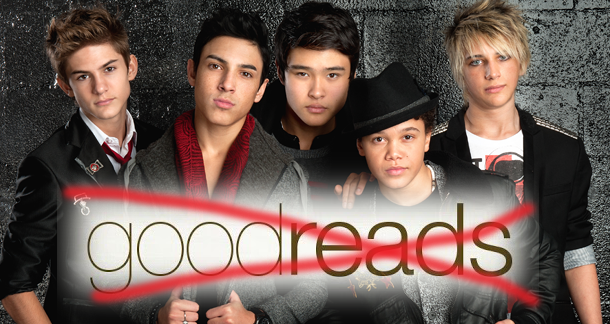 These days ‘theft’ of imagery is all too commonplace on the internet; it’s way too easy to just ‘borrow’ an image without any thought as to where it came from and who actually owns the copyright. Goodreads found this out after a photo agency, BWP Media filed a lawsuit last week “seeking $150,000 in copyright damages related to the unauthorized posting of a photo showing Dalton Rappatoni, a member of boy band IM5”.

Okay, my first reaction was “Who?”, but then I’m old. Apparently, the image in question is in a very small group dedicated to the boy band (oh, that explains it) — it only has four members, all young and female — and is part of a montage at the bottom of the group page. I’m surprised the agency even found it, but then it appears I’m a bit naive.

The lawsuit, one of several filed by BWP, appears to be part of what some describe as a “copyright trolling” operation in which image owners use software to find unauthorized use of their photos on the internet and then work with law firms, sometimes on a contingency basis, to demand large sums of money. In the last year, federal judges have begun to take a dim view of certain aggressive trolling tactics.

As the article says, “BWP Media may face an uphill fight against Goodreads”, as the Digital Millenium Copyright Act (DMCA) in some way protects websites from any liability when a user posts copyrighted material. I guess that’s a good thing, as they shouldn’t really be held accountable for their young and impetuous users’ probably accidental usage of the image.

I suppose copyright holders have a vested interest in cracking down on these things, but it seems a little, well, greedy. Don’t get me wrong, I’m not some kind of hippy suggesting everything on the web should be free — I’m a starving writer, after all — but this just strikes me as another case where we really need to find some alternative to hefty penalties and agree some kind of fair use for found imagery. Don’t you think?

My only thought to this is 'ridiculous'. I get that companies want to protect their copyright, but this is taking it way too far. If you're so concerned about it, watermark your images or add the copyright at the bottom. I'd certainly like to know the sources of some of the images I've found on the net.

Also, whenever you upload an image to the Goodreads' server, or any social media site, you sign off the copyright liability ticker... doesn't that protect the site from damages? If I were those four members, I'd be hiding my wallet, or... more realistically, forgetting this band even existed.

Why even bother spreading the word about your favorite band if their representation is going to sue you for posting their photo on the internet?