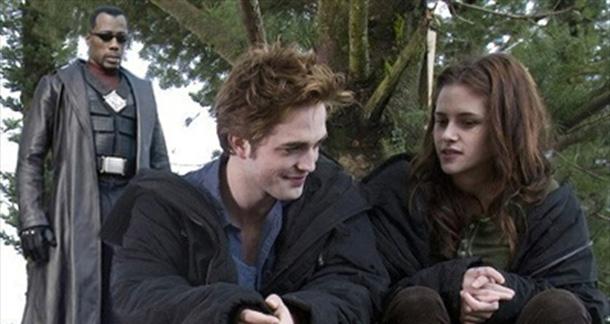 And honestly, I don't know which one scares me more.

Social literary site Goodreads put together a nifty graph detailing how its readers have reviewed Twilight, and cross-referenced that with geographical data, showing us which states have an overall favorable impression of Stephenie Meyer's Mormon-fantasy nonstory, and which states have an overall negative impression. In the map below, states that love Twilight are red; the haters are blue.

What's really funny is that there's some correlation between this data and the results of the 2008 presidential elections, which you can see here.

Weird, isn't it? This seems to indicate that if you favorably review Twilight, then you are a Republican. Which I guess makes sense?

In other news, the latest Twilight movie--with its vampire C-sections, werewolves that love babies, and violent sex--grossed $138.1 million this past weekend.

So, how did your state do on this?

Now we know where to drop the bombs. You guys saw that movie The Crazies? Same deal.

I'm in a pink area, please redirect the bomb to red.

California for the win!

EricMBacon from Vermont is reading The Autobiography of a Corpse November 22, 2011 - 4:28pm

Oregon, I'm so proud of you.

BWAAAAAAA HAAAAAAAA - that pic is amazing, laughed coffee out of my nose. Just epic. Will be laughing at that for days!

That isn't fair though, people from Kentucky can't read...