George W. Bush Says People Are Surprised He Can Read/Write 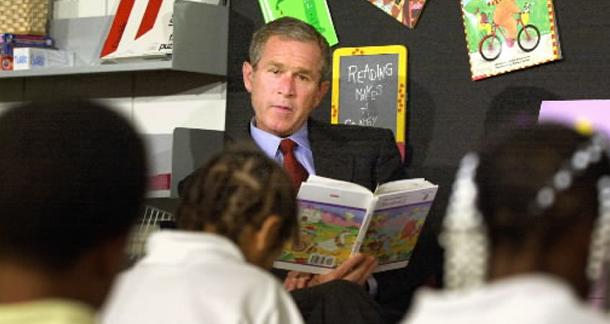 Former President George W. Bush, the man who once said that his foes "misunderestimated" him, has a pretty good sense of humor about his perceived lack of literacy.

During a speech before the Chamber of Commerce in Wichita, Kansas on Thursday, Bush said that the news he had written a memoir, Decision Points, came as a shock to some.

Seriously, has anyone read Decision Points? I've been meaning to pick it up, as I'm interested to see Bush's perception of his presidency. Anyway, I know how much y'all love it when we write about politics, so happy Monday!

I am disappointed in people for actually thinking he was illiterate.

He made up words. Thats how literate he is.

Class Director
Rob from New York City is reading at a fast enough pace it would be cumbersome to update this November 7, 2011 - 11:30am

Limbless K9 - right? The guy was president! You can't be a slobbering moron and be elected president. People who would say he was, that's just petty name-calling.

Joshua Chaplinsky from New York is reading a lot more during the quarantine November 7, 2011 - 11:53am

I'm no fan, but the man is not illiterate. It is obvious from the picture that he can read on a Level 2 Storybook level.

@Josh, that's probably how a lot of comments here we'll go and I feel the same way. Of course he can't be illiterate if he was elected president. But, by comparison to other presidents he did create a lot words.

Class Director
Rob from New York City is reading at a fast enough pace it would be cumbersome to update this November 7, 2011 - 12:27pm

If it wasn't for George Bush, I wouldn't be able to use "the internets" in place of "internet." That's the kind of gift that keeps on giving.

He may not be the brightest or the best, but you cannot become president if you're illiterate. It's more pathetic to think that people actually thought that he was illiterate than it is to listen to Bush's speeches.