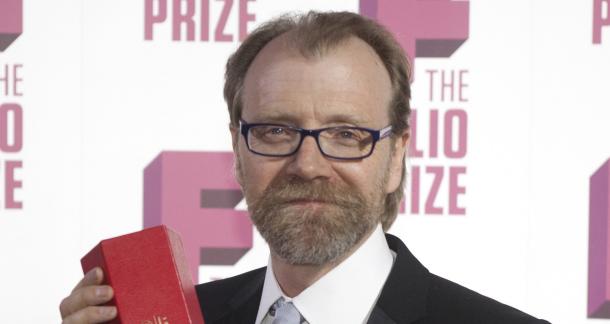 The prize, given to the best fiction writing in the English language regardless of form, was rumored by The Guardian to be leaning towards Ann Carson's Red Doc, a novel written in verse. Other shortlisted authors included Kent Haruf and Rachel Kushner.

Tenth of December has been a big book for Saunders. Just last week it won the Story Prize. In April 2013 Saunders was named one of Time Magazine's 100 most influential people in the world. The story "Home" from Tenth Of December was nominated for a Bram Stoker Award when it was first published in 2011.

More to the point, critics and readers are eating this short story collection alive. Tenth Of December was named one of the top 10 books of 2013 by the New York Times Book Review. Over 17,000 Goodreads users have rated the book, and out of 5 stars its current rating is a 3.5.  Amazon reviews are a bit lower, 3.4 out of a possible 5.  However, in reading through the reviews one discovers that a number of the middling ratings are due to the book being a bit darker than expected by some readers.

It's unusual for a short story writer to make such a splash in the world of books and the larger world as well.  If you haven't started in on any George Saunders yet, you can read the title story from Tenth Of December here. If you've got a coffee break coming up, read his commencement speech to graduates of Syracuse University.  Or check out Keith Rawson's interview with George Saunders for LitReactor.  You won't regret it.

Whatever your introduction to Saunders might be, make it happen today.

So glad to find this out. I loved that book. If anyone needs any further help deciding, I have a review of Tenth of December at Pantheon Magazine.

George Saunders is my favorite author.

Community Manager
helpfulsnowman from Colorado is reading But What If We're Wrong? by Chuck Klosterman April 16, 2014 - 12:56pm

Nice! Great review, and AWESOME link to the free stories.