George R.R. Martin to Publish New Book This December, But It's Not What You Think... 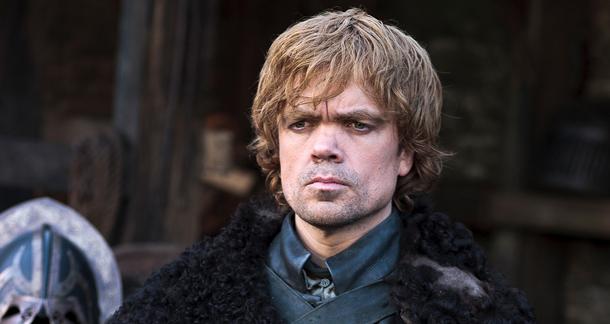 As we all know, Game of Thrones is super huge right now. The third season premiere recently made my co-worker squeal in delight. Fans who haven't read the five published books in the Song of Fire and Ice series are picking them up now, and those already up to speed are clamoring for the sixth installment, tentatively titled The Winds of Winter. I mean, really clamoring. Sometimes nastily so.

So, when I read the headline on The Huffington Post that series author George R.R. Martin was set to publish a new book this December, I thought, finally. Now maybe the Internet will be calm again. No such luck, it turns out, as the forthcoming book is not the sixth SOFI installment, but rather a compilation of quotes from a prominent character, Tyrion Lannister.

Yep. It's called The Wit and Wisdom of Tyrion Lannister, and it will be nothing more than a collection of the character's aphorisms. Let's turn to HuffPo's Zoë Triska for more insight:

For those of you who are only vaguely familiar with the series, Tyrion Lannister, who is played by Peter Dinklage in the HBO adaptation, is the youngest of the super wealthy Lannisters. He is constantly criticized and belittled by his family, yet he is by far the nicest and most empathetic of them.

It's hard to say exactly how fans will respond to this. On the one hand, it is GOT/SOFI-related, so it might delight those particularly fond of this character. On the other hand, it's not the sixth book. On a third hand, the book does seem a bit unnecessary; only die-hards will buy it, but the point is, they'll buy it.

What does everyone think? Nice companion to the series, or the perfect gift for your GoT-obsessed little cousin you barely know otherwise?

It does have a cash grab feel to it, but I'm the kind of person that wastes lots of money on small things about my favourite characters, so I'll probably buy it.

I don't see a problem. Gives the uber-fans something to tide them over till book 6 comes out, and gets GRRM a paycheck so he can keep writing. Win/Win. I'll probably buy it.

Definitely a cash grab.  But it's hard for me to begrudge any writer a cash grab, even one as successful as GRRM.