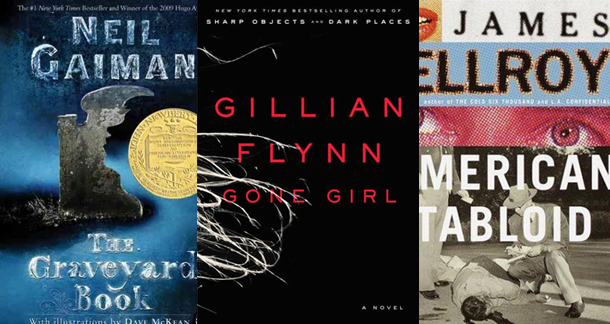 Neil Gaiman’s Graveyard Book has been of interest for a while and was originally planned to be a stop-motion project for Disney. But that all fell apart last summer. Now, sources say Ron Howard is in negtiations to direct a live-action version of the book. Telling the story of a boy named Nobody Owens, an orphan raised in a graveyard by ghosts after his family is murdered, (it’s a great book, if you haven’t read it — and not just for kids), Gaiman’s book won the Newbery and Carnegie medals for best children’s book, the only time one book has won both. Howard’s involvement could make it very good.

David Fincher, director of movies like Fight Club, Girl with the Dragon Tattoo, and Se7en is apparently in talks to direct last year’s popular bestseller by Gillian Flynn, Gone Girl. The ‘ingeniously plotted’ thriller follows Nick and Amy Dunne, from Amy’s disappearance and Nick’s subsequent actions as the prime suspect. Reese Witherspoon and Bruna Papandrea’s will produce through their Pacific Standard company, but it’s not clear if Witherspoon is intending to play Amy. I also wonder if Brad Pitt will be involved somehow, judging by how many of Fincher’s other films he’s been in…

And finally, one of the stop-and-go-’what?’ moments from Sundance. James Franco, in an interview with MTV, talked about his next project. “We're going to do American Tabloid by James Ellroy,” Franco revealed to MTV’s Josh Horowitz. He added that he’ll be involved in the adaptation as both the star and director. “It’s not all put together yet,” he cautioned. “It’s still early. You're getting the scoop.” Ellroy’s thriller covers five years in the life of three law enforcement officers from 1958 to 1963, culminating with Kennedy’s assassination. I’m not entirely convinced it’ll happen — Bruce Willis optioned the rights for a miniseries and then Tom Hanks' production company Playtone tried to do the same. We’ll have to wait and see if it happens.

What do you think? Are these pairings good?

Joshua Chaplinsky from New York is reading a lot more during the quarantine January 23, 2013 - 7:19am

Fincher and Gone Girl is a little obvious, but would most likely be awesome. As far as American Tabloid, I have a newfound love for Franco because of Spring Breakers, but he's not the right director for Ellroy's convoluted epic.

Nobody's seen a Franco-directed film yet though. He might turn out to be a great director. Look at Ben Affleck, crummy actor who turned out to be an awesome director. He should do American Tabloid, actually.

Joshua Chaplinsky from New York is reading a lot more during the quarantine January 23, 2013 - 8:35am

Not to be a douche, but I've seen a Franco-directed film. He's written/directed a few with more coming this year. The one I'll be most interested in is As I Lay Dying.

Joshua Chaplinsky from New York is reading a lot more during the quarantine January 23, 2013 - 10:10am

I have too, and nothing I've seen indicates he has the chops to handle Tabloid. At least not yet.

It's a daunting job to take on.

Fincher is great, and I'm sure he'll do a great job with this material. I do really hope he changes the ending of Gone Girl, which I found anticlimatic and disappointing.

I'm still sad that The Graveyard Book isn't going to be a Laika stop motion flick ala Coraline and Paranorman. Still, Howard is an interesting choice.

Oh, James Franco. He's been picking up directing projects left and right. Gotta give him credit for wanting to bring a lot of iconic literature to life. I'm interested to see how he does with the projects he has chosen.

I'm excited for The Graveyard Book, but I agree that it would be awesome as stop-motion rather than live action. Or some form of animation. It would look wicked cool.

I'm not really sure that Howard is the right fit for 'The Graveyard Book'.  He is a good director, just with more reality based subjects.  However, I hope to be proved wrong.