From Page To Screen: Neil Gaiman Writes 'American Gods' Pilot and 'Under the Dome' Series Hits Next Summer 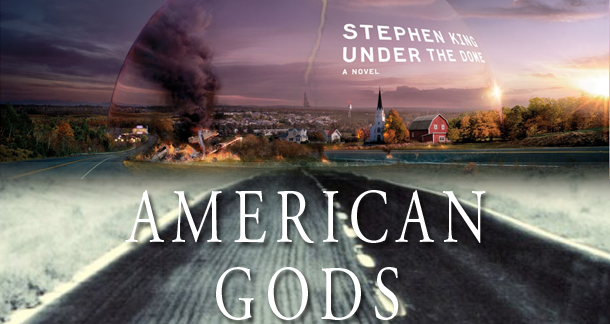 Twitter’s a great thing - particularly for letting things slip (even if accidentally-on-purpose). Okay, maybe he meant to tell the world, but Neil Gaiman revealed on Twitter this week that he’s in the process of writing a pilot script based on his novel, American Gods, for HBO. And while hints about the adaptation surfaced last year, this is the first hard evidence I’ve seen.

As already reported here, Stephen King’s novel Under The Dome is headed for small-screen stardom. We now know the 13 episodes will air on CBS next summer. With a scriptwriting team including Brian K Vaughn, Neal Baer, Justin Falvey and of course, King himself, it should prove interesting. Add to that Niels Arden Oplev, director of The Girl with the Dragon Tattoo, helming the first episode and the hairs on the back of my neck stand up. Steven Spielberg’s Amblin Television is producing the show in conjunction with CBS Television. There are also plans by Simon & Schuster to re-release the trade paperback and eBook of Under The Dome to coincide with the series.

I'd love to see American Gods on HBO.  And then Ansani Brothers. Or is it Boys?  And to have him writing the pilot is sweet as hell.  I hope they do Good Omens soon.

As far as Under the Dome. I don't know if CBS would do it justice.  AMC would have been better.

Courtney from the Midwest is reading Monkey: A Journey to the West and a thousand college textbooks November 30, 2012 - 6:03pm

I've never been a big TV fan, nor do I usually fan-girl out when I hear something is picked up for production, but Under the Dome? Jesus Christ, this should be amazing.

I love when an Author can expand beyond his novel and using the same source material reconstruct his plot into a television series. I'm pretty excited about this news.

I love American Gods.  I would watch the hell out of this.

In other Gaiman news...  60,000 donated to CBLD Fund by the Gaiman Foundation.

EdVaughn from Louisville, Ky is reading a whole bunch of different stuff December 1, 2012 - 10:53am

I'm curious about Under The Dome. I'd have more confidence in it if it stayed on Showtime or went somewhere like AMC. But who knows. It might end up being good still. If I had HBO I'd watch the shit out of American Gods.