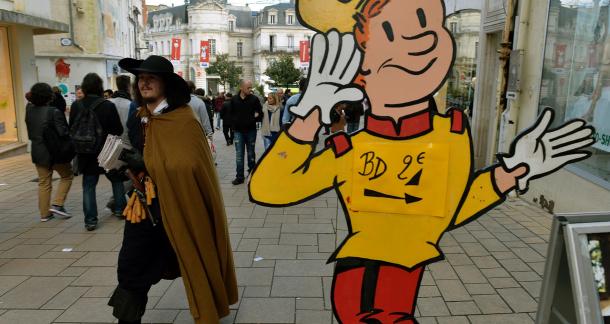 The Angoulême Comics Festival isn’t doing so well this year. In January the event came under fire when its shortlist of 30 failed to include a single woman, leading many of the nominees to drop out in protest. Now they’re making another round on the web after a particularly poor joke left the audience stunned, reports The Guardian.

Compere Richard Gaitet is responsible for pulling a prank that involved naming a list of fake winners for the festival’s prizes. Those announced were ecstatic—that is, until two women interrupted Gaitet and joked, “Richard, we really have to start now.”

Gaitet then rattled off the list of real winners, leaving those previously called upon to stew in their own misery. Reactions ranged from people leaving the room in tears to sheer outrage. Sam Souibgui, joke winner and editorial director for Komikku, was quoted in saying, “Thank goodness my authors weren’t there, and I didn’t have to explain this shitty French humor to them.”

The festival later defended its actions by stating that the hoax was meant to “briefly instill doubt to raise a smile.”

What would you do if someone pulled such a cruel prank on you?

Joshua Chaplinsky from New York is reading a lot more during the quarantine February 4, 2016 - 1:22pm

Perhaps I might recognize that others have a sense of humor that differs from my own. Sometimes that humor might piss me the fuck off. It doesn't make it horrible humor. It makes it humor I don't like. I guess I would just have to get over it.

"Your being offended doesn't make you right."

Joshua Chaplinsky from New York is reading a lot more during the quarantine February 5, 2016 - 10:29am

I feel this was less a "joke," less humor, and more of a prank, and pranksters deserve a kick in the dick.