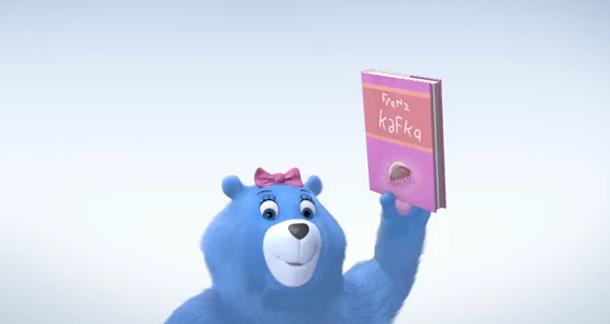 Franz Kafka showed up in a recent ad from Charmin featuring that bowel-regular family of cartoon bears.

No, this isn't the set-up to a joke. And no, this isn't like those flurry of TV commercials where dead celebrities were resurrected to dance with vacuums. Rather, it's Kafka's most famous work, The Metamorphosis, that makes the cameo here, proclaimed by an adolescent female bear as her preferred reading material while, ahem, going. Check it out:

I don't quite know what to make of this. My gut tells me the simplest answer is the correct one: it's merely a joke, a juxtaposition of two unlikely elements—cute cartoon girl-bear and grotesque, surreal comedy—for humorous effect. But perhaps this is a jab on the copywriter's part. "Bathroom reads" are typically pithy and easily digested (pun absolutely intended). Perhaps the good folks at Charmin think Kafka is caca.

Perhaps I'm over-analyzing. What do you think?