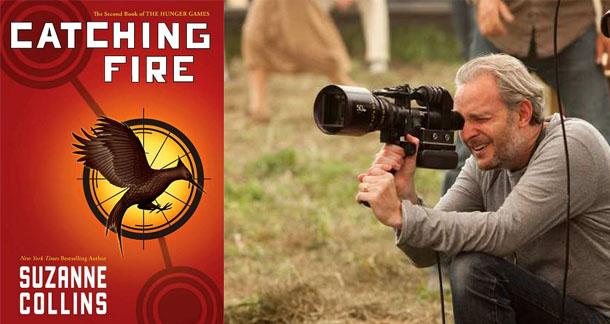 via Shock Till You Drop:

This has been kicking around as a rumor for a little while, but it's finally been confirmed: Francis Lawrence will take over directorial duties on The Hunger Games sequel, Catching Fire.

Here's what Lawrence had to say:

"It is truly an honor and a privilege to bring Catching Fire, the second chapter of Suzanne's beloved trilogy, to the big screen. I fell in love with the characters, the themes and the world she created and this chapter opens all of these elements up in such a thrilling, emotional and surprising way. I can't wait to dive right into it and bring this chapter to life along with the truly superb cast and filmmakers involved."

Personally, I'm bummed. I haven't read the books, but I saw the movie--and I really liked it. While I wish Gary Ross had explored some of the themes a little more, it was a nice piece of sci-fi that showed a fair amount of restraint. I don't think there was a single info-dump to be had, and I still understood the entire dynamic of that world, which is something to be lauded.

Lawrence, on the other hand, took I Am Legend, an amazing book with a fantastic ending, and turned it into an extremely stupid movie. (Which, granted, that could have been partially the studio's fault because they did shoot an ending that wasn't completely idiotic, except they didn't use it. Also, those CGI monsters looked so stupid.)

So, I'm not holding my breath on the sequel.

What do you folks think? Am I being overly pessimistic?

I liked I Am Legend.

No, really. I did. I own the DVD. I watch it when I'm in the mood for something dark, but not particularly frightening. It's pretty good.

Personally, I enjoyed the first movie, but in the sense that it was a great support for the first book. I don't think the movie stands well on its own. Honestly, if I hadn't read the book, I don't know if I'd like the movie at all. As much as I enjoyed the film, I think a major part of that is because it makes a great companion to the book.

A good movie, regardless of the book it was based on, should be able to stand on its own. Which is why I enjoyed I Am legend -- I never read the original story it was based on, yet the movie had its own style and the characters hooked me right away, and I liked the way the backstory unfolded. I even liked the ending! I think Lawrence will be able to take Catching Fire and add the elements I felt were missing in the first film.

Honestly, I'm tired of YA-books-to-movies having an "unfinished" quality to them. Ever since Twilight came out, small-time studios have it in their heads that they can pick up a YA book and turn it into a low budget retelling in film form, and it'll be okay because kids don't care about the quality of anything, just the brand. Hunger Games was a good movie and like I said, a great companion to the book series, but I felt the corners they cut and there was a distinct lack of direction style. Maybe Lawrence will spice up Catching Fire. I'm hopeful!