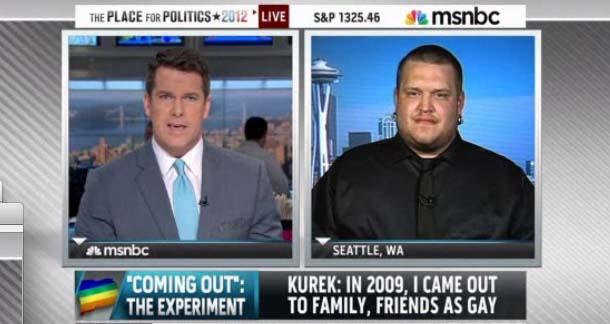 Timothy Kurek's staunch religious upbringing left him with some not-so-nice views on the LGBT community, and he bullied people based on their sexual orientation--but he reevaluated those views when a friend came out, and he watched as she was ostracized by her family.

To better understand the social stigma of being gay, he came out to his family and frequented gay-friendly establishments for a year. Now he's writing a book about his experience, due to be released in October.

MSNBC's Thomas Roberts calls out Kurek on whether he can say he's gay and go to a few LGBT-friendly establishments and know "what the heck it's really like to be a gay man living in modern day times." Kurek admits to a limited experience, and says the book isn't about the internal struggle of being gay, but about "how the label of gay impacted my external life and how those things affected my life and challenged my beliefs."

His goal, he said, is to inspire tolerance among the intolerant.

Sounds interesting. There are a million ways this could go wrong, but after watching the video, Kurek strikes me as sincere, and as a reformed homophobe, I'm interested to see the evolution of his views.

What do you think? Important step toward tolerance? LGBT readers, are you offended by Kurek's actions? Discuss!

I find this incredibly strange. I'm all for staunch religious people changing their views on homosexuality, but why write a book about your faked lifestyle choice for a year? Too me, this is incredibly strange and fake. I can't stand liars. I'm slightly more tolerant of liars when it's for a good cause, but at what cost is this? Why not read a book written by an actual Christian Gay person who has been cut off from friends and family because of his/her choice?? There are LOTS of them out there.

This isn't a new-age Black Like Me. He didn't need to do this to write a personal truth, because these stories already exist and aren't lies. How many characters on MTV's The Real World alone have been Christian gays turned away by their own communities? And their stories are true. He could have interviewed his friend, been honest with his family and changed his beliefs and written a book. Instead, he lived as a gay person. Who finds it easy to lie to everyone they meet for an entire year? That's strange to me. He could have frequented all of the same places, telling everyone the truth: I'm a conservative man rethinking my values. What can you tell me about yourself, your culture, your coming out experience...etc. I would have liked that book. Only he didn't do that. He stepped completely in the shoes of a gay man to sensationalize himself. I don't trust it.

Despite appearing sincere, this guy clearly has some deluded sense of self-importance.

I question whether his motive is "to inspire tolerance among the intolerant," and not to sell a few books. Most of us, at least those of us who read, are probably familiar with the struggles of the LGBT community and other groups that are discriminated against. I'd rather read a first person narrative from an actual member of one of those discriminated groups, rather than some dude who's pretending to be victimized.

Reminds me of Grizzly Man, minus the greusome ending.

JEFFREY GRANT BARR from Central OR is reading Nothing but fucking Shakespeare, for the rest of my life June 15, 2012 - 12:25pm

Aren't writers paid to be liars? I wrote a book about serial killers. Doesn't mean I am one. At least, as far as you know.

Even reading the views of the LGBT community or talking to LGBT friends, how can you really know what it's like unless you experience it, at least in a diluted form, for yourself? Regardless of this guy's personal motivation, it's an interesting experiment, especially for a former homophobe.

What I'm wondering is how he behaved as 'gay'. Did he just come out and continue acting like himself or try to mimick what he thought would be normal behaviour? That would be my big problem with it, but I still think it's interesting.

I'll start with this: I am not gay. However, I am part of one of the smallest minority groups in the country, people with visual impairment  and/or blindness. What this idiot did doesn't relate to me directly because I'm not gay, but it does relate in the sense that he is somebody pretending to be from a minority group and then trying to make money off of it afterward. If I met somebody who pretended to be blind for a year and then tried to cash in and get a book deal out of it, I'd have some much less than kind words for them.

What's worse is that people might read this book and then get the idea that they can understand what it is to be gay when they are not. There are already too many glaring misconceptions of homosexuals--and every other minority group--that some people don't take the time to evaluate with any degree of common sense or compassion. Idiots like this who are potentially creating more misconceptions need to just keep their half-cocked ideas to themselves.

Couldn't be more of a stunt if he pretended to be gay in a red-white-and-blue jumpsuit while jumping Snake River Canyon on a rocket-powered motorcycle...

It seems like the main issue people have with this guy is that he's going to make money off this book. As a capitalist, that doesn't bother me. You know how people say "XYZ is in right now?" Well, gay is in right now. I don't mean that homosexuality is a passing "fad," but it is at the immediate forefront of the American zeitgeist, right up there with the economy. So if people (gay or straight) are going to get offended by books, TV, movies, etc. using homosexuality to make money, well tough shit.

One of the earliest lessons a lot of us are taught is to "walk a mile in someone's shoes." Motives aside, that's what this guy did, and frankly what more people should do. So instead of getting upset that he's "making money off the struggles of the gay community," think of it this way: would you pay $20 to make one person more tolerant?

Vinny, You're confused. Personally, I am not upset that he's making money off this book - I'm upset that people are rallying behind someone who lied to their friends and family and real gays to fake gay. It's really strange and seems like a publicity stunt. I have to admit the fact that he's going to profit off it is irritating, but not as much as his behavior.

He isn't making up a fictional story. This is the trueish story of one former bigot playing Black Like Me for an entire year. Griffin only went black for six weeks. This guy lied for an entire year. If he wrote gay characters in fiction, this would not bother me. I'm bothered by this man because how he could he pretend like that with people he cares about? I don't trust this person, this writer. I find him very suspicious.

I don't believe you have to be gay to write gay. Let's of straight men and women include gay characters in their fiction. I also think that if he'd have lied less, I may have a different opinion. The truth is this guy lied to everyone he cared about to act gay 24/7 to prove that gay people have got it rough - something most rational people already know. I do believe that this guy is a creepy weirdo.