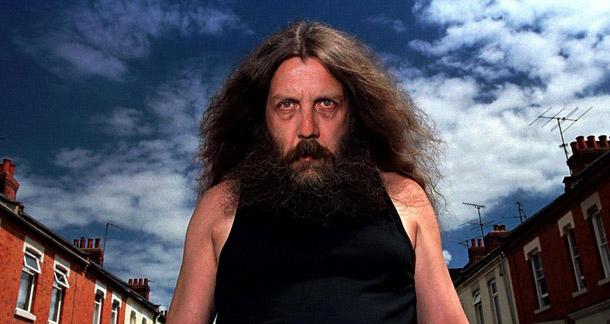 Alan Moore, one of the most accomplished writers in modern comics and the creative force behind iconic graphic novels like Watchmen and V for Vendetta, has made no attempt to conceal his disdain for the Hollywood dream machine over the years. From an interview with The Los Angeles Times:

I find film in its modern form to be quite bullying. It spoon-feeds us, which has the effect of watering down our collective cultural imagination. It is as if we are freshly hatched birds looking up with our mouths open waiting for Hollywood to feed us more regurgitated worms. The Watchmen film sounds like more regurgitated worms. I for one am sick of worms. Can’t we get something else?

Moore’s open hostility towards Hollywood is just one reason that fans of his work should be excited by the first installment of Jimmy’s Dream, a darkly surreal series of films. Taking the reigns of creative control firmly in hand, Moore is collaborating on the stylish, atmospheric tale with director Mitch Jenkins. The first episode is up on Vice’s Motherboard blog, and the whole series is preceded by a (NSFW) prologue, Act of Faith.

Jimmy’s End takes place in Nighthampton, an ominous yet strangely familiar alternative reality based on Moore’s hometown of Northhampton. A synopsis from Vice:

Following from the unnerving prelude Act of Faith, Alan Moore and Mitch Jenkins unveil a phantasmagoric English dreamtime made of goosefleshed pin-up girls, burned out comedians and faulty lights, with judgment just behind the tinsel.

What did you think? Will you be watching the rest of the series? I, for one, cannot wait to see where it goes.

Joshua Chaplinsky from New York is reading a lot more during the quarantine November 27, 2012 - 10:05am

Put some sleeves on, Grandma!

Ah, Christmas comes early this year! This looks like the most promising series since Lars Von Trier did The Kingdom.