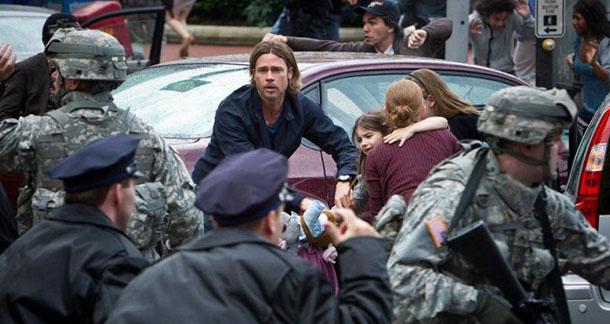 Few zombie movies in recent years have garnered the kind of attention that the big-screen adaptation of Max Brooks’ World War Z has. After a series of missteps, including extensive rewrites of J. Michael Straczynski’s original screenplay, seven weeks of reshoots, and mixed reception of the early footage, the first full trailer for Marc Forster’s undead epic has been released.

The film follows Gerry Lane, a worker for the United Nations played by Brad Pitt, as he travels the world in an attempt to uncover the origins of a zombie pandemic that threatens to overwhelm civilization. Audiences can expect a slick, visual effects-laden extravaganza when the movie is released next summer, but many fans have derided the film for appearing to depart significantly from the book.

Judging from the trailer, it seems the social commentary that made World War Z such a compelling book will take a backseat to huge explosions, impressive visuals, and taut, edgy chase scenes. However, most fans agree that the new trailer puts some of the original concerns about the movie to rest, and it certainly looks entertaining, if nothing else.

Are you a fan of the book? Our own Meredith Borders thought it sucked. What do you think of the trailer?

Joshua Chaplinsky from New York is reading a lot more during the quarantine November 9, 2012 - 8:30am

Don't know if it'll be good, but I've gotta say, the sea of zombies is pretty impressive.

I can't shake the feeling that, even had the filmmakers opted for a grittier, documentary-style approach, people would still be complaining. I wonder if the Battle of Yonkers will be included.

leahzero from Chicago is reading everything Fitzgerald wrote. November 9, 2012 - 9:19am

The Battle of Yonkers was one of the most irritating and asinine parts of the novel, for reasons involving both social realism and physics.

This trailer looks like a fairly mindless ONE MAN (with a really bad haircut) MUST SAVE THE WORLD, AND HIS FAMILY action flick with some weirdly bloodless zombies. PG-13 FTL. Also, interesting that they changed them from slow zombies to fast ones.

I will admit, however, that the wall climbing scene is pure nightmare fuel.

I'm going to see this regardless, but I'm keeping my expectations very, very low.

I'm tired of zombies, and the first person to say so.

AtomicBanana from SoCal is reading The Wind Through the Keyhole November 9, 2012 - 11:17am

I definitely would have liked this movie to be more of the Wanio story about the army after the fall of the States.  The filmmakers really lost the chance to make a really cool reinvisoning of the Civil War, with occasional flashbacks to Yonkers and the Great Panic.

Seeing Wanio go through the Reclamation, the winter disasters, occupying Reb cities, taking out LaMOEs.  WWZ has such a rich canon that it's deeply saddening to see it shunted aside in favor of a CG disaster.

I'm very tired of zombies, and I've never read this book, and yes there's a lot of CGI there, but all of that said... it's a pretty kickass trailer.  I got excited by it.

JEFFREY GRANT BARR from Central OR is reading Nothing but fucking Shakespeare, for the rest of my life November 9, 2012 - 1:50pm

I hated the book, and zombies were fucked out 3 years ago (for horror fans at least)... but that trailer looked pretty damn good.

I didn't like the book. I'm fucking sick of Zombies.

They need to make a zombie movie from the zombies point of view where he goes around killing pretties and their little dogs too.

I loved the book when I read it a few years back. Very creepy. The zombies did things that hadn't even crossed my mind, but that didn't include moving so fast they could create a wall of undead. Sorry. Total cheeseball to me (and not in a good way). I'm not a big fan of fast-moving zombies (though it worked fine in 28 Days Later). Brad Pitt in World War Z looks about as true to the book as Tom Cruise in War of the Worlds, which is a disappointment.

Still, I'm interested in checking it out, just as I was interested in seeing the Dawn of the Dead remake several years ago. That, too, was a disappointment, though. Honestly, if you want to make a zombie movie, make it & call it something else. No need to spoil the stories that came before it by using the name & morphing the story beyond recognition.