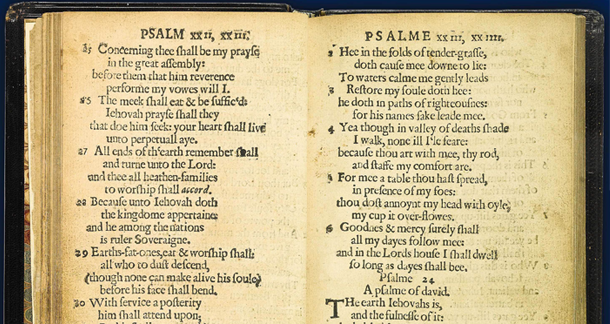 Rare books are valuable, of course, and rare books printed in the early days of the country that would become the United States of America seem to be increasingly valuable, a fact confirmed by an auction taking place today at Sotheby’s in New York. A copy of the very rare Bay Psalm Book — one of only 11 still known to be in existence — is expected to fetch up to $30 million, making it “the most expensive written volume ever sold at auction”.

Formally The Whole Booke of Psalmes Faithfully Translated into English Metre, it was printed in 1640, just 20 years after the landing of the Mayflower. It was  a rough book and includes spelling mistakes such as ‘psalm’ and ‘psalme’. Described as a “rejection of the Latin tradition”, the book was a re-translation of the Hebrew texts of the original psalms. Frankly, it’s impressive they managed it at all.

It was a very complicated procedure. They were there literally in the wilderness producing a 300-page book. It was designed to be carried in the pocket and taken to church. It is a simple book - not elaborate but designed to be used. In fact they were used to such an extent that many would have simply fallen to pieces.

The decision to sell one of two copies caused a bit of a ruckus in the church that owns the book (as we originally reported), with a section of the congregation unwilling to part with it. There were only 1,700 copies originally printed, paving the way for the separation of churches and American independence, not to mention Thomas Paine’s Common Sense and many other religious freedoms we take for granted today.

This is one of the last two copies owned by the historic Old South Church in Boston, which the church is selling to fund charity and building work. It’s expected the copy will stay in the U.S., but with only 11 of them left, it’s bound to attract considerable interest.

If it reaches its expected upper price tag it would shatter the previous record held by The Birds of America by John James Audubon, a copy of which sold for £7.12m in 2010.

With a number of other copies owned by libraries, it seems likely it will end up in one of those. Would you buy it if you had the chance? It is a little slice of history, after all

edsikov from New York by way of Natrona Hts PA is reading absolutely nothing November 26, 2013 - 10:35am

Sure, I'd buy it. Now that Francis Bacon is out of my price range at $145 million, this book is a bargain.