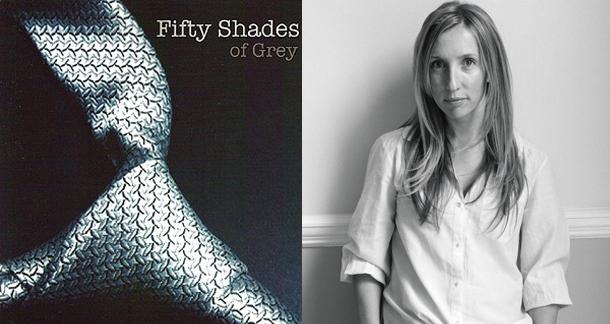 We've been following news of Fifty Shades' journey to the screen for some time now, from Bret Easton Ellis' real or provocatively made-up involvement with the screenplay—he's no longer attached either way—to Gus Van Sant shooting a test reel in a bid to win the director's chair.

Now comes word from SlashFilm that a director has been announced: Sam Taylor-Johnson, whose only other film was 2009's John Lennon biopic Nowhere Boy. Rumors were abound that Taylor-Johnson's husband, Aaron Taylor-Johnson (Lennon in Nowhere Boy, Kick-Ass, the upcoming Godzilla reboot), might play Christian Grey, but those reports were quickly squashed.

Taylor-Johnson is the third female member of the crew, joining producer Dana Brunetti and screenwriter Kelly Marcel. Of course, Fifty Shades was written by female author E.L. James, so it's nice to see a major Hollywood production mostly controlled by women.

Sam’s unique ability to gracefully showcase complex relationships dealing with love, emotion and sexual chemistry make her the ideal director to bring Christian and Anastasia’s relationship to life. E.L. James’ characters and vivid storytelling require a director who is willing to take risks and push the envelope where needed, and Sam is a natural fit.

No cast information is available at this time, so feel free to speculate wildly. I haven't read the books, so I'll just say James Spader and Maggie Gyllenhaal...oh wait.

Who would you cast? Or do you care?

Jane Wiseman from living outside of Albuquerque/in Minneapolis is reading Look to Windward by Iain M. Banks June 20, 2013 - 9:08am

They should be so lucky as to make a film one-twentieth as interesting as "The Secretary," especially with such dismal material to work from.

That trio of "50 Shades of Grey" is the worst drek ever.... and the books have already lost their popular momentum, especially after the news reportings of the finding of those 3 kidnapped "sex slaves" in Ohio. The social climate has changed and they're making this movie too late, on the downside of the "interest spike" that the public had. If they HAD to make this crap into a movie, they're doing it a year too late.

I don't think they're looking at this whole thing very sensibly.

The books were popular because, even reading it on a crowded subway, there is a degree of privacy and "class" associated with it. Tis literature, and therefore refined.

Every female in my family will be in attendance opening night. I do not think most people reading this website are the target audience.

Gosling will be Christian Grey I bet