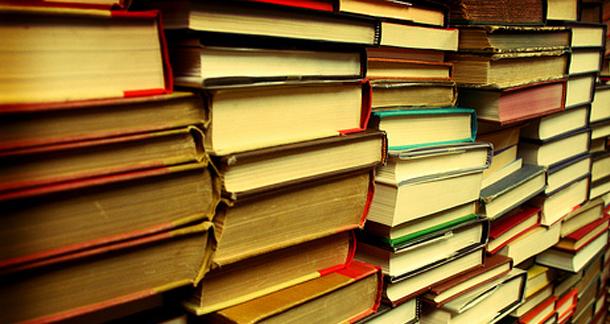 How many full-length books could you write in a year? Well, if it's not at least two, you might not be cut out for professional novel writing. Gone are the days where one book per year would satisfy public demand—now, thanks to eReaders, competitive markets, and the "gimme gimme right now" mentality enabled by the internet, popular authors are being urged to crank out double the average amount.

And alongside an extra novel a year, writers are encouraged to come up with novellas and short stories to build buzz for their next big release. Publishers say that a carefully released short story, timed a few weeks before a big hardcover comes out, can help entice new readers who'd be willing to pay a dollar for a downloadable short story, but reluctant to spend the bigger bucks a new eBook or hardcover.

For big-name writers with a devoted fanbase, publishers realize that more books equal more money. Take, for example, James Patterson—a novelist who wrote 12 books last year. (Some were aided by co-writers, but still. Wow.) This year, his publisher expects to release 13 more.

Is demanding that lazy writers up their production a good thing? Or is the digital age cheapening the novel writing/reading experience, forcing novelists to churn out crap so their publishers can sell it to a voracious market?

You can read the full article here.

JEFFREY GRANT BARR from Central OR is reading Nothing but fucking Shakespeare, for the rest of my life May 17, 2012 - 3:23pm

I've watched this trend with growing dread - as a glacially slow writer, this is yet another hurdle to 'success'. Granted, success means different things to different people, but for me, it's about having people read my stuff - and the sheer volume of fiction available to the average consumer has lessened that chance already.

Doesn't seem that overwhelming to me. I wrote my first novel in 6 months. My agent is editing it now. Meanwhile, I've been writing my second book and I'm on pace to finish it in only 12 weeks.

Just depends on the writer, I guess. Look at someone like George R.R. Martin. The guy writes 1000 page books and people are willing to wait years for them.

Joshua Chaplinsky from New York is reading a lot more during the quarantine May 17, 2012 - 3:56pm

Let crappy mass market authors write as much as they like. I don't really see this affecting 'literary' authors.

JEFFREY GRANT BARR from Central OR is reading Nothing but fucking Shakespeare, for the rest of my life May 17, 2012 - 4:03pm

I want to be a crappy mass market author!

Quality trumps quantity. I'm not impressed by a dozen books in a year. I'm impressed by a good book. Agriculture is about the only area where a pile of crap amounts to anything useful, and a mountain of feces is exactly what James Patterson has accumulated over his career. I'd rather have my one gold nugget than all the crap in the world. If that translates to fewer book sales or my not being able to write fiction for a living, oh well. I'll take however long I need to come up with something I can be proud of, whether that's three months or three years.

I enjoy the work of writers who crank out one book in five years and the work of those who write five books in one year.

I'm not a fan of the quantity first mentality. It doesn't take a lot of factors into consideration. All writers can't work under that time frame. And one book by an author could pull in as much money as 30 by another. The mentality doesn't seem well thought-out.

The unwritten message I got from the NYT article was, diversify. Personally I think it's fine to put out one solid novel a year, but maybe try to supplement it with some shorts, a novella or screenplay, a blog.

JEFFREY GRANT BARR from Central OR is reading Nothing but fucking Shakespeare, for the rest of my life May 17, 2012 - 5:09pm

Remember when Stephen King had to publish the Bachman Books for fear of saturating the market? Sheesh.

Some of James Patterson's novels were aided by co-writers....

Does that seem like cheating to anyone else here?

I have a lot of problems with Patterson...

The extensive use of co-authors, the "I'ma kill Alex Cross" ultimatum commercial nonsense, the writing.

The man just has no respect for his own work. He doesn't even respect his characters or his audience.

WesFord from America (CO, NE, NC, AK, NY, WA) is reading We Have Always Lived in the Castle by Shirley Jackson, Portable Atheist by Hitchens, 20th Century Ghosts by Joe Hill May 18, 2012 - 4:08am

This is terrifying!! Not only did my nation succumb to the less than mediocre writing of Twilight, but they sunk lower into 50 Shades of Grey and the publishing industry is falling for it! "Who cares if it's good writing as long as it sells!!" I fear, without a positive revolution in literature, our country is going to halve our time to becoming fat people in floating chairs a la Wall-E.

Do we sell out and feed the masses less than worthy work or do we maintain integrity and become the new Beat Movement, disgusted with the mainstream and striving to make something new, beautiful, original?

I'd rather work day-jobs for the rest of my life than sign a contract which forced me to crank out a bunch of stuff I didn't like.

Did Patterson write any novels this last year?

Many of the authors doing well in e-books are actually re-issuing their back catalogs, or in the instance of self-published books they'd been sitting on, shelved, drawered, whatever.

I know of only one writer who's published 500 books in his 25 year career, Robert Randisi.

Kwaku Osei-Afrifa from London is reading 'Gardens of the Sun' by Paul McAuley, 'The Hyperion Omnibus' by Dan Simmons and 'Tell-All' by Chuck Palahniuk May 24, 2012 - 6:57am

'How many full-length books could you write in a year? Well, if it's not at least two, you might not be cut out for professional novel writing' - there's a strong chance that my ambition is now in the wrong field.