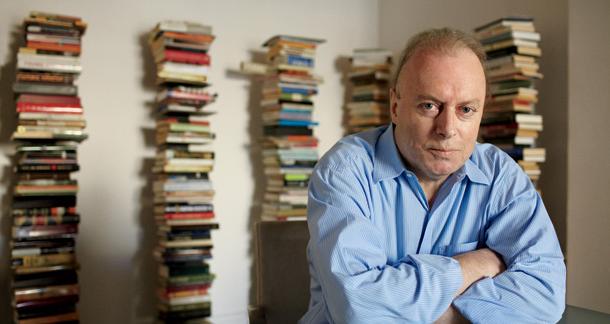 We knew it was coming, but that doesn't serve to soften the blow. Christopher Hitchens died yesterday at the age of 62 after a year-long battle with esophageal cancer.

Hitchens was born in Portsmouth, Hampshire, England. He studied philosophy, politics and economics, and after immigrating to the U.S. in 1981, began writing for The Nation. He would later edit and contribute articles to publications like Vanity Fair, Atlantic Monthly, Slate, Harper’s, The Washington Post and The Huffington Post.

He wrote more than two dozen books, including the best-selling god Is Not Great, made frequent radio and television appearances, and taught as a visiting professor at the New School of Social Research, the University of Pittsburgh, and the University of California, Berkeley.

He was an outspoken atheist who argued strongly against religion, and even criticized Mother Teresa- both in his 1994 documentary, Hell's Angel, and in Vanity Fair. Other targets of his scorn: the Vietnam War, racism, the British monarchy and Henry Kissinger... just to name a few. He possessed a fearsome intellect and took great pleasure in provocation.

His final memoir, aptly entitled Mortality, will be published posthumously by the UK's Atlantic Books in January 2012. Based on a series of essays he wrote for Vanity Fair, the book will chronicle Hitchens' battle with cancer.

This is a sad day for free-thinkers everywhere. We'll miss you, Hitch.

He was a brilliant mind. Even where I didn't agree with him his voice and sincerety of language were one of the most powerful Ive ever heard/read. As soon as I heard this last night I went out to Barnes and Nobel and picked up Arguably: Essays by Chrsitopher Hitchens. Check it out. Has some of his great Vanity Fair stuff in it. also, this is a great video;

If you can't find great fiction  in there somewhere, leave your writers card at the door ;)

RIP to a great mind of the twentieth century.

Mick Cory from Kentucky is reading everything you have ever posted online and is frankly shocked you have survived this long December 16, 2011 - 4:13pm

I am not the type of person who has heroes. My perception of the human species as a whole precludes this. However, and as you might guess, writers have always held my attention, garnered my affections, come the closest to attaining the title of hero. Among those whose ability to manipulate language can seem damn near magical at times, Christopher Hitchens (1949-2011) alone occupies a corner in that vast hall of wordsmiths. I am off to raise many glasses to the memory of Mr. Hitchens. A brilliant and prolific writer and a staunch defender of reason. He was an advocate for the freedom of the human animal from all that would seek to confine it. The loss will be felt deeply. Farewell.

EricWojo from Livonia, Michigan is reading The Brothers Karamazov December 17, 2011 - 9:51am

I was completely unproductive today after hearing this news.  I discovered him, along with the other three Horsemen (Richard Dawkins, Daniel Dennett and Sam Harris), about a year ago.  The same time Hitch came down with cancer.

It's a shame such a talent and reasonable thinker was taken from us so soon.

“Your ideal authors ought to pull you from the foundering of your previous existence, not smilingly guide you into a friendly and peaceable harbor.”
― Christopher Hitchens, Hitch-22

Joshua Chaplinsky from New York is reading a lot more during the quarantine December 16, 2011 - 8:46pm

"If you gave Falwell an enema he'd be buried in a match box."

A remarkable man.  A definite hero for me.  No doubt he'll be sorely missed.