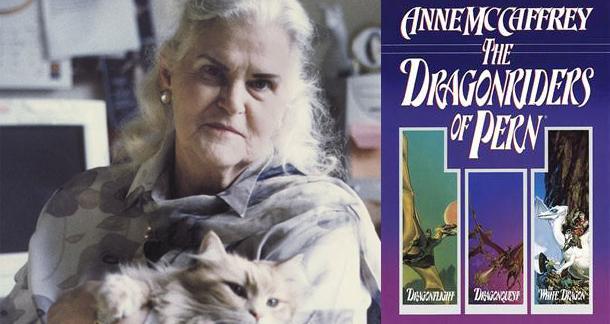 Anne McCaffrey, a fantasy novelist best known for her series Dragonriders of Pern, has passed away at the age of 85. She reportedly died of a stroke at her home in Ireland.

According to the Wall Street Journal, "McCaffrey’s books... are considered seminal works of fantasy fiction. The books combined mythic inspiration, sci-fi, and adventure."

McCaffrey had been answering questions from fans on her website up until recently (that's dedication), and while I'm not familiar with her work, she sounds like she was a very cool lady. The bio on her website says that "her first novel, Restoree, was written as a protest against the absurd and unrealistic portrayals of women in [science-fiction] novels in the 50s and early 60s."

Over the course of her 35-year career, she won a Hugo Award and a Nebula Award. Her book The White Dragon was one of the first sci-fi novels to make the New York Times Best Seller List. The Science Fiction Writers of America named her a Grand Master in 2005, and she was inducted into The Science Fiction Hall of Fame in 2006.

On her blog, she offered this advice for aspiring writers:

“First — keep reading. Writers are readers. Writers are also people who can’t not write. Second, follow Heinlein’s rules for getting published: 1. Write it. 2. Finish it. 3. Send it out. 4. Keep sending it out until someone sends you a check. There are variations on that, but that’s basically what works.”

Can any LitReactors tell us about her writing? And is there a literary equivalent of pouring one on the floor?

Pouring one on the floor? I'd say banging out a fantasy short story and then sending it out over and over until someone sends a check would be appropos.

This is sad. McCaffrey had a lot of talent and I enjoyed just about everything of hers that I have read.