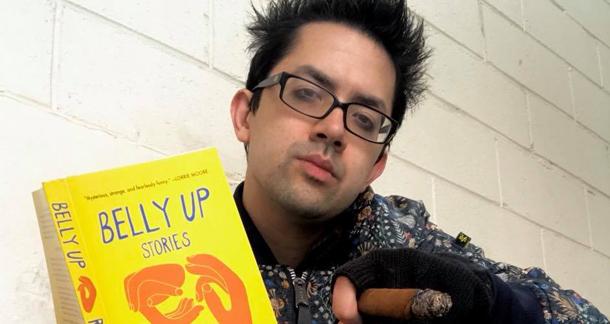 Hey, did you know Fangoria, the storied horror and cult film magazine, is back in business? 'Tis true! In February of this year the mag was revived by Dallas-based entertainment company Cinestate. Meredith Borders, whose byline has appeared here on numerous occassions, is a contributing editor, so you know it's going to be good.

Also, they're going to publish books under a Fangoria Present’s banner! Which they say will feature branded novels that "blend the literary with the horrific for unique reading experiences."

And... the second book in that series will be by none other than man-about-town Michael J. Seidlinger. If you don't know Seidlinger, that's a little surprising to me, because I've got a theory that everyone in the lit community knows Seidlinger. Mostly by his ubiquotious cigar/indie-book selfies on social media. But he's also written a bunch of books and runs Civil Coping Mechanism, and now works at Melville House.

Claire is a student of forensic science, Victor is the Gentleman Killer. Subverting expectations, Clair seduces Victor and keeps him in her apartment as her pet—her darkest secret—before taking to the road to revisit her past pets in one final, bonechilling conclusion. Beautifully written, provocative to read, Seidlinger delves into Claire's motivations and impetus to present a compelling psychosexual portrait of a woman obsessed with performance, with power, with sex, and with gore.

Cinestate is hooked in with S. Craig Zahler, of Bone Tomahawk and Brawl in Cell Block 99—they're producing his next film and publishing his next book, in case you were curious about their pedigree. I asked Seidlinger how he felt about the announcement:

Being published by Fangoria, I'd say I could die happy now but then again, like I've always said, I've been dead for years. Pinch me, slap me across the face: tell me this is really happening.

My Pet Serial Killer drops Sept. 18. Put this one on your radar.