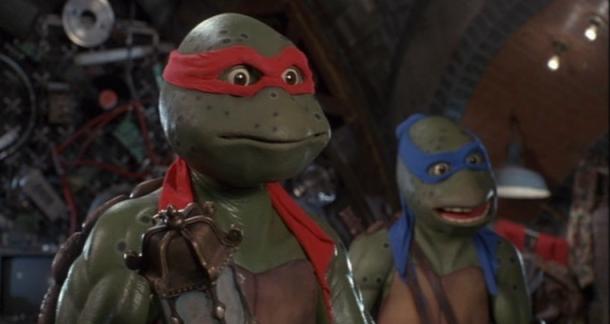 Michael Bay recently announced he's reviving the Teenage Mutant Ninja Turtles franchise, with a film that he'll produce through Platinum Dunes. When he announced the project, he said these turtles will be "from an alien race, and they are going to be tough, edgy, funny and completely loveable.”

Cue the outrage from the fan community. According to the cartoon and movies, the turtles were imbued with their powers because of a toxic ooze spill in the New York City sewer system.

The outcry has been so great that Bay himself weighed in:

“Fans need to take a breath, and chill. They have not read the script. Our team is working closely with one of the original creators of Ninja Turtles to help expand and give a more complex back story. Relax, we are including everything that made you become fans in the first place. We are just building a richer world.”

There's two things to note here. First, the people who complain that things like this "ruin their childhood" scare me. This is what you choose to be upset about? And you can't ruin something that already happened. If I eat a bad cheeseburger for dinner tonight, it doesn't sully or devalue all the other great cheeseburgers I've eaten in my life.

Oh, and, guess what? Alien involvement is canon, from the original comic on which the cartoon and show were based (and which, I'm sure, none of these "real fans" have read). As pointed out by Devin Faraci at Badass Digest:

Because if you were a real Turtles fan, you would know that TCRI, the place from whence the mutagenic ooze came, was actually a secret base for alien Utroms. And the Utroms were represented in the cartoon show by Krang, the little pink squishy guy in a big robot exoskeleton.

Can someone please explain to me why this is such a big deal? It's not like he's making them into frogs or badgers.

Ray Richards from Michigan and Iowa is reading The Great Shark Hunt by Hunter S. Thompson March 21, 2012 - 7:55am

They were holding out for a good director.

Um, the mutagen WAS from alien origin but the Turtles were not an alien race. There's a big difference.

I think if another director attempted this the blastback would be much less severe.  Also if they mentioned they were expanding on the backstory of the turtles and the ooze in the first place, fans would have just been more driven to find and read the old comics.

Bay's quote is kind of vague...is he saying that the turtles themselves are now aliens? Because that does kind of change (unnecessarily, in my opinion) a good chunk of what makes people respond to the franchise...the old "raped my childhood" line is, once again, stupid, unbridled hyperbole. But c'mon...Michael Bay, king of terrible adaptations, comes out and says he's remaking TMNT "only this time they're ALIENS!!! SUPER COOL!!!"...that makes me cringe. My gut instinct is that is yet another example of Hollywood reverse-engineering a terrible, original IP to fit the identity of a popular brand in order to sell more tickets.

Actually if he was making them into badgers, there at least might be a slight chance I'd go see it.

Bay's telling fans to "chill out", but look at the mess he made of Transformers!

I think it comes down to people just not trusting Michael Bay. If it was anyone else, they wouldn't jump off buildings this early. I can guarantee one thing though. The way Hollywood works, everything you loved as a kid is going to get remade and changes are going to be made that you aren't going to like. That's just how it's done.

I'm waiting for My LIttle Pony, the live action movie!  The ponies are hookers now though.  Julia Robert plays horseteeth.

Nothing matters in Bay films except explosions. Sh*t gonna get blowed up real good...