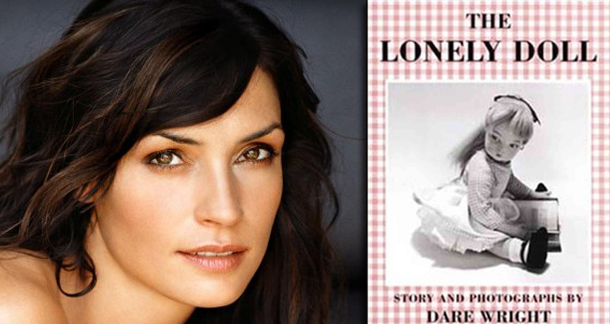 Another one for the weirdness files: last weekend Wolverine and X-Men star Famke Janssen reported that someone had been in her penthouse apartment in Greenwich Village, New York. It appears that the intruder didn’t take anything, he or she merely left the actress a copy of a strange 1950’s children’s book called The Lonely Doll.

The X-Men actress told officers that when she came home on Saturday she found a copy of The Lonely Doll on a shelf beside her bed. Janssen told the police it did not belong to her and she was the only one with access to the penthouse.

The police found no evidence of forced entry or that anything had been taken and Janssen insists that no one has access to her apartment — or a key — making it even weirder. The book that Janssen found is about, you guessed it, a lonely doll.

The 1950s children's book is about a doll called Edith, "who lived in a nice house and had everything she needed except somebody to play with".

That adage about truth being stranger than fiction so often rings true. Let’s just hope it’s not the start of a real-life thriller for the actress.

Ever had an episode like this happen to you?

Dwayne from Cincinnati, Ohio (suburbs) is reading books that rotate to often to keep this updated August 16, 2013 - 7:07am

Most evil book promotion ever?

I was wondering where I left my copy...

I'll bet it sees a spike in purchases.

Was anyone else curious about what books were actually ON her shelves? I have an obsession with the contents of people's shelves, although if someone left an extra book on one of mine, I wouldn't notice.

God that is creepy.

Sounds like the start to a scary movie. It makes my skin crawl.