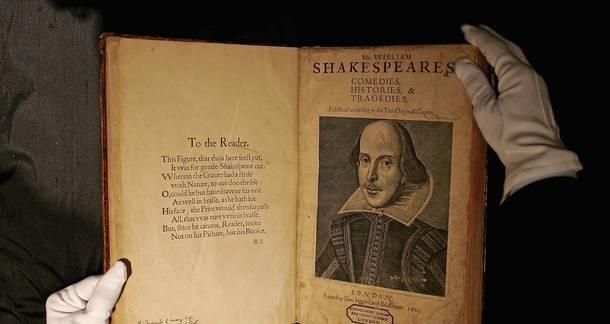 In July of 2014 the Folger Library in Washington, D.C. announced a groundbreaking plan to send 18 copies of their 82 First Folios of Shakespeare’s works around the country to each state in the Union, plus Puerto Rico and Washington, D.C. The library took hundreds of applications from museums, colleges, libraries, and other venues across the country and finally announced the sites chosen for the exhibition on February 26th, 2015. The goal of the exhibition is to not only commemorate the 400th anniversary of Shakespeare’s death in 1616, but also to bring these historic copies to audiences that otherwise would be unable to experience them.

The First Folio, published in 1623, seven years after Shakespeare’s death, is a collection of 36 of Shakespeare’s plays, with the exception of Pericles and Two Noble Kinsmen. Out of the 36 plays included, only 18 had been printed before in quarto, making it the first reliable source for works such as Julius Caesar, the Tempest, and the Taming of the Shrew. Each Folio exhibited will display Hamlet's Act 3, Scene 1 "to be or not to be" soliloquy, as it is one of the most recognizable passages for American audiences. In addition, Hamlet has one of the most fascinating print histories of Shakespeare's plays, though the Folio and Second Quarto versions are the ones generally taught.

The Folio is a collection of works that have clearly had a profound influence on American culture; while I've been lucky enough to view the First Folio on display in the British Library in London, I fully intend on attending the Folger's exhibition. Even if you are not a Shakespeare fan or interested in rare books, I suggest you do the same. Listed below are the selected sites for the 2016 exhibition, official dates will be released this spring.

Detroit, Michigan: Wayne State University with the Detroit Institute of Arts and the Detroit Public Library

To learn more about the printing of Shakespeare’s works, including the First Folio, click here.