EXCLUSIVE! Book Trailer for Matt Bell's 'In the House Upon the Dirt Between the Lake and the Woods' 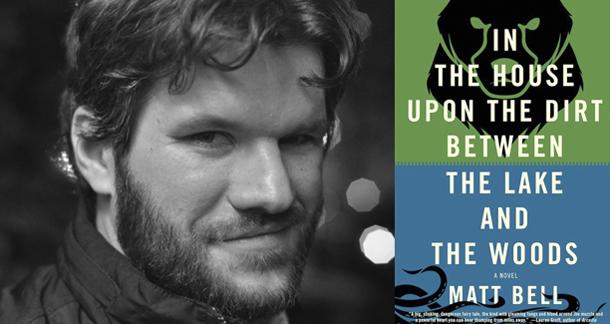 If you haven't heard about Matt Bell's book, In the House Upon the Dirt Between the Lake and the Woods (Soho Press), then you must be living under a rock. Nominated for several awards, and on just about every "best of the year" list out there (including my own top five here at LR), this dark bit of magical realism is a hypnotic, emotional journey. If you don't mind, I'm going to quote myself here, from my review of the book over at The Nervous Breakdown:

...we are lured into familiar territory—the world of fables and tall tales, where our expectations of the surreal, the grotesque, and the magical are fulfilled in ever-expanding layers. But beyond the illusions, beyond the world building, darkness, and the unknown is an allegory—a harsh yet beautiful lesson on what it means to be a man, a father, and a husband; to be a woman, a mother, and a wife. Told in layers, fractured into sections, unfolding in a grand tapestry that weaves emotions and actions into a complex series of destinies and consequences, this novel is not an easy read. But the reward is dense prose, powerful psychoanalysis, and the unsettling feeling that our own actions today—many miles from the woods with its failing bear, and its lake with its undulating squid—might be bound by similar rules and outcomes.

I've known Matt for many years, but first fell in love with his writing with Cataclysm Baby, and further became a fan with this title. Do yourself a favor, and pick up his work. He'll also have a story, "Dredge" in the upcoming The New Black at Dark House Press, where I'm Editor-in-Chief. The story was selected for the Best American Mystery Stories, so you KNOW it's good—and that I'm putting my money where my mouth is when I say he's one of the best authors writing today. Taking the most compelling aspects of genre and literary fiction to create a fascinating and entertaining hybrid, Matt Bell is at the forefront of the emerging wave of neo-noir and genre-bending fiction.

Looks like my kind of book. Love the trailer.