Excavated Site In Denmark May Be The Royal Hall From "Beowulf" 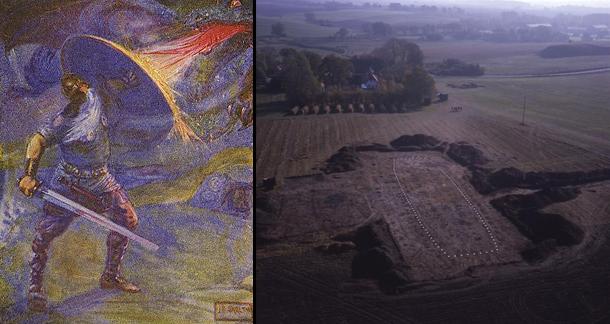 A team of archealogists in Denmark have unearthed a great dining hall in a field in Lejre that they believe not only belonged to the real-life King Hrothgar, but was the setting for the anonymous Old English poem Beowulf, David Keys of the Independent reports.

The archeologists – led by Tom Christensen, director of the Lejre investigation – have so far managed not only to find, excavate and date the late 5th or early 6th century building most likely to have been Lejre’s first royal hall (described in Beowulf as `the greatest hall under heaven’), but have also succeeded in reconstructing what was on the menu at the great feasts held there.

Excavations in the area over the years have yielded plenty of treasures dating back from approximately 500 to 1000 AD, according to BBC History Magazine. Archeologists "identified as many as 40 pieces of jewelry, including some made of solid gold, together with pottery drinking vessels imported from England and Germany."

John Niles, a former professor and an expert on the Lejre site and its surrounding area, spoke to The Huffington Post about the importance of the discovery:

The halls were the focal points of a larger settlement complex that included probable workshops, barns, ordinary dwellings and places of religious activity. Archeology has thus confirmed what textual sources that date from a thousand years ago consistently maintain: that Lejre was a 'central place' that became, in the course of time, the cradle of the modern kingdom of Denmark.

Now if they could just find Grendel's skeleton…Or better yet, the real Hogwarts.

What literary places—real or imagined—would you like to see unearthed?